Round 2 seemed to take an age to arrive, the 5-week wait saw a number of teams taking part in the exclusive practice session the day before the race. This month we would see a very healthy 30 teams take to the starting grid. Missing were March Racing who have confirmed that they will be back in May under the support of Ryehouse and Robert Nurse from 7Kart.

The month we would welcome a brand new team, Alpha Racing. Justin Whitmore & Luke Johnson would join on their 7Kart XV Chassis and would be their first time racing with each other. Another new team formed on the day, Reece Shephard paired with Harrison Pughe to form RH Racing.

We welcomed back Alex Goldschmidt who would be in the commentary box. Alex celebrated his 1-year anniversary at RHPK. 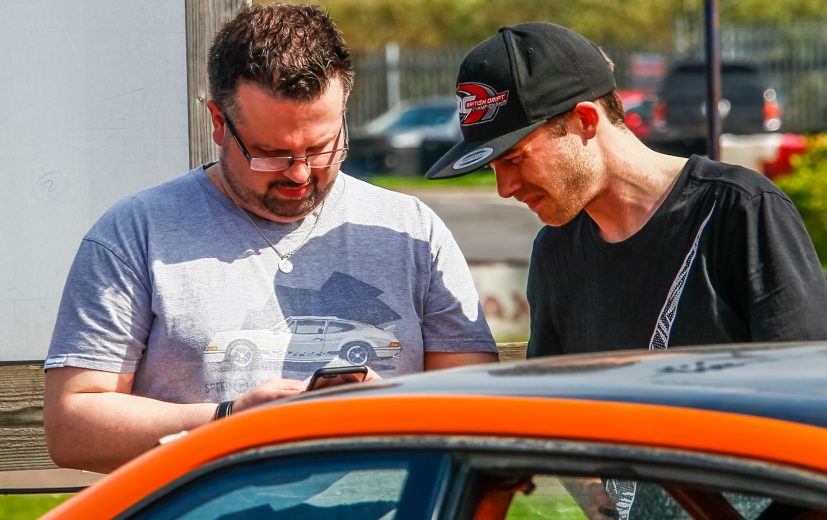 Alex Goldschmidt back at RHPK

On the run-up to the second round of the season, we announced a very special feature – Danny Grundy & Aurimas vaškelis joined us to put on an incredible Drift Display before the start of the race.

Days before the race we heald a draw to pick two lucky members of RHPK to ride in the drift cars. The pair had a 20-minute slot before teams took to the dummy grid. It was a JND Racing lockout as Jaunius Zukas & Tomas Grilevicius won the draw! 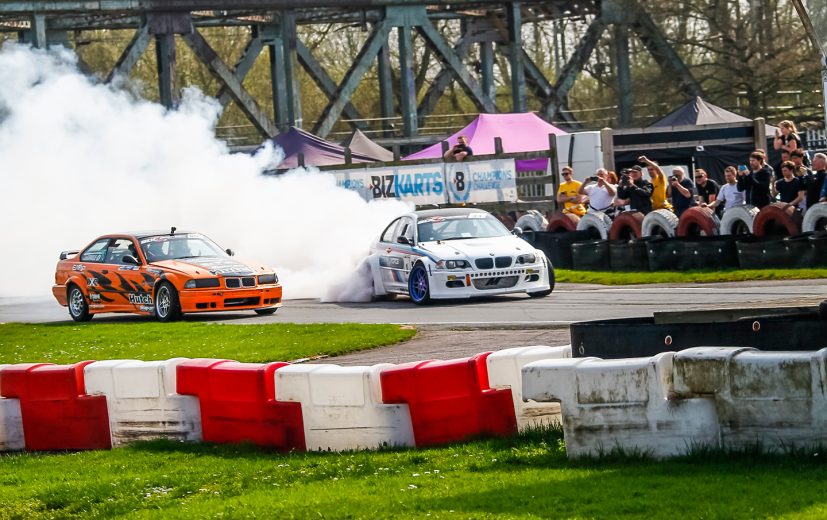 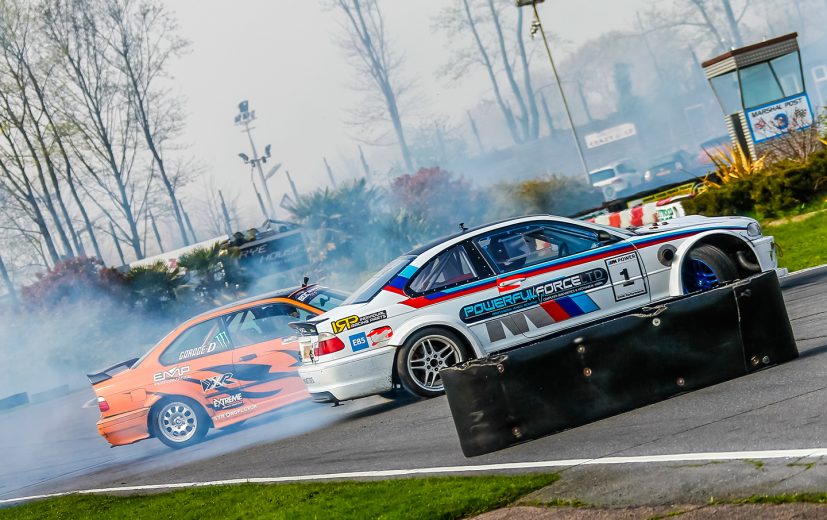 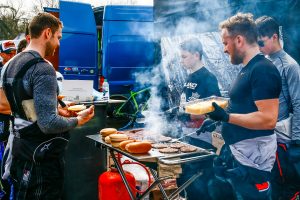 The Saturday Sausage fest was in action once again this round with their new BBQ which was crowd-funded by a number of teams in the RHPK paddock.

In Clubman, DAD Racing put in a very impressive 41.920 which secured the team’s pole position in class, more impressive was their position overall, 6th place! March pole sitters, Euro Lambo had to settle for 2nd in class with a time of 42.124. Adam from KA Racing looked on a charge this month, securing the team 3rd in class just a fraction off of second place with a lap time of 42.153. The newly formed team, Zingrae Racing in their second race managed a much higher qualifying position this month, sitting next to KA Racing for 4th position and Universal Racing took 5th place in class with a time of 42.297

As the flag dropped, 30 karts head into Stadium bend, disaster already for Lambo Racing as they come down the straight on one engine, Spectre Racing drives a tight line trying to find a way round Custom Rods but ends up touching the inside of the corner and bringing water onto the track. As a result, the whole field behind Custom Rods slides to the outside of the corner. Burton Power Racing spins which sends them to the back of the field.

Lambo Racing pull off to the side of the track as Sticky Monkeys manage to make contact with Joe from Lambo.

Custom Rods were later disqualified from the race after engine scrutineering, their ignition timing was found to be non-compliant. A big blow for the team who were devastated.

Team JAM are the biggest movers on the first lap, gaining no less than 8 places! fantastic start for Team JAM who are now up to 12th place.

Lap 1 and Zingrae Racing are leading the Clubman pack, DAD in 2nd with Euro Lambo and KA Racing threatening from behind. Alpha Racing are now up to 24th place after jumping 4 places at the start.

Lap 2, Silverline Racing lose 2 places to Pelam Racing & BMH, they drop down to 20th place. There is a long chain of karts from 3rd to 11th place separated by less than 2 seconds, yellow flags are waved whilst Lambo tries to get their engine restarted. 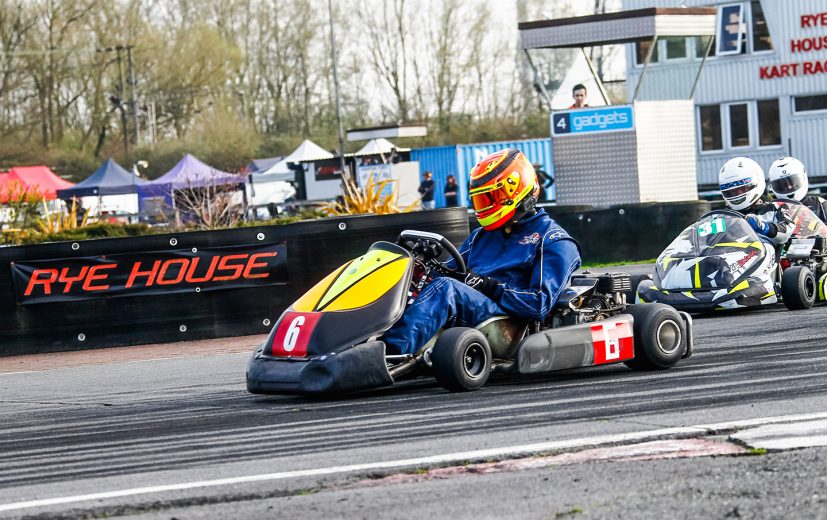 Lambo Racing dive into the pits, they find the source of their engine problems. The bolt which holds the throttle linkage. They manage to get the kart back out but effectively takes them out of the running for a decent finish this round.

Polish Lambo V2 (Now a super team) and Polish Lambo both take KA Racing for 10th and 11th place. 3 Lambo teams are now in the top 12.

Burton Power take 19th, BMH follow through as they take Artifex and RH Racing. The newly formed Artifex Racing this month with Gavin Craig. The 3 karts separated by just a second, Artifex Racing make the move and take RH Racing but there is contact as RH Racing is pushed out slightly – racing incident, BMH now 22nd 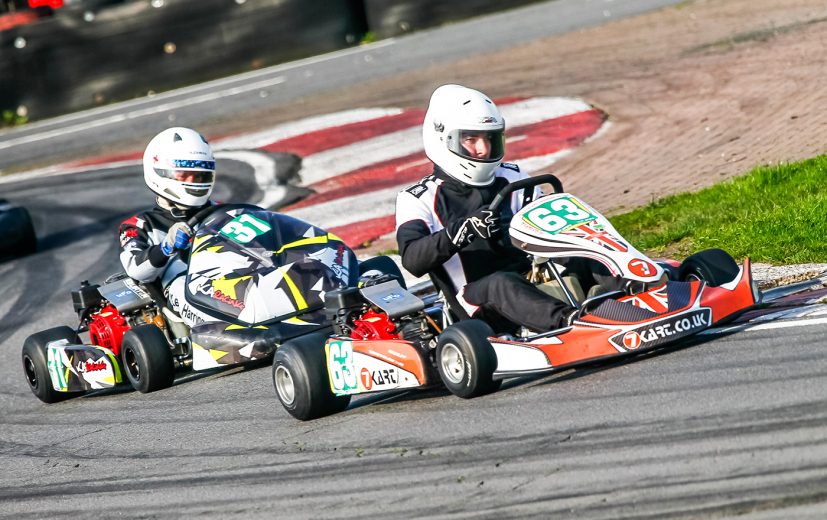 JRH Racing make the move down the inside of JAM on the first hairpin for the position, closely followed by Universal Racing in 15th. DAD Racing are now on the rear bumper of ABA Racing who seem to be struggling for pace in the early stages of the race in 7th, a far cry from where they were last month.

GKD are less than a tenth away from HRS 1 in 4th place, they look like they are in a challenging position to make a move. Both are just behind Spectre Racing in 3rd. CSM Lambo drop down the order to 26th place.

Lap 100, ABA Racing is forced to retire due to an engine failure – a gutting result for the team given their 2nd place in round 1.

Zingrae Racing, in their second race in RHPK are leading the Clubman field, a stunning race from them so far, fighting for position with Euro Lambo for Clubman top spot. A personal best of 41.610 – beating a number of Super teams! it was unfortunately short lived as they weighed in 1.5kg under the 180kg weight limit. Graeme Cobb confirmed that the team miscalculated the weight in the morning. Gutting for the team who were certain for a podium this month.

Lap 190, Water is on the track at stadium, a number of karts fall victim to the lack of grip. BHM are the first to go off but manage to keep it on the track. Pelam Racing have nowhere to go and hits the tyre wall and collected by Burton Power Racing who managed to find space under Pelam’s Kart and GKD Racing taking most of the damage from the crash – having to retire. 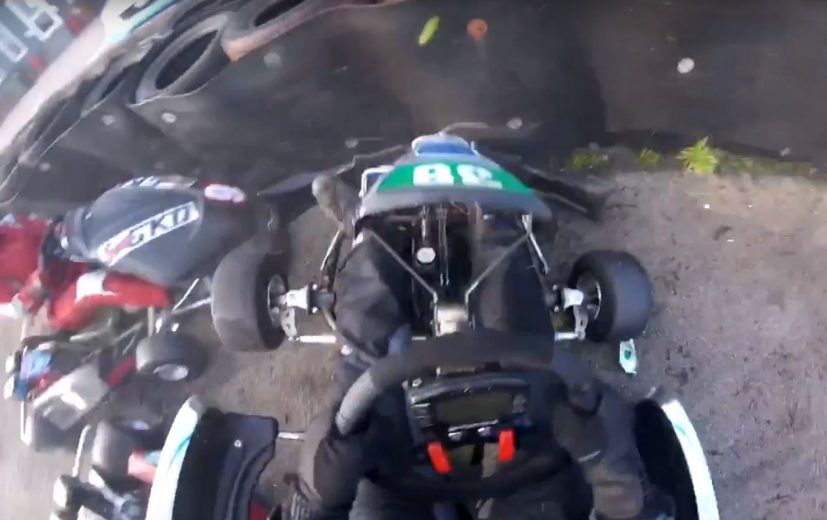 Onboard footage from Pelam Racing

As the race is winding down, HRS1 are now trying to un-lap themselves from Helicopter Services, a very close battle between Spectre Racing, Helicopter, and HRS1, HRS1 make the move stick on Helicopter and try to pull back the gap before the pit stops.

As the chequered flag drops Helicopter Services take the win! A complete contrast from Round 1’s DNF! Spectre Racing take second, a lap down the road from Helicopter. HRS1 take a well deserved 3rd place! A stunning result for the team who are greeted with a big cheer as they step up to the podium. JRH take a fantastic 4th place, despite qualifying in 13th place. Polish Lambo V2 take their first trophy after being promoted to Super this round – A tribute to the team in their first Super outing.

In Clubman Euro Lambo take another dominating win over DAD in second. DAD put in a stunning best lap of 41.637, quicker than most of the Super teams out there. Artifex Racing take a very popular 3rd place in their newly formed team. A fantastic result for them, so much time and effort has gone into the background to get them where they are. KA Racing take a well deserved 4th place, KA Racing’s Adam taking on some epic battles throughout the race. The last spot goes to Burton Power Racing in 5th place, a very unlikely spot for them given the problems they had in the morning with blowing an engine then coming off at Stadium bend breaking the brake pedal – Tommy Valentine brought the kart home for the last spot on the podium.