Something which comes up each year is the class system, which is closely monitored to keep the series competitive. I’ve decided to write a brief article which outlines why & how we apply the class system in RHPK.

For a number of years we have always run two Championships, Super and Clubman – go back even further and you will find that we introduced a Pro class which sat in between Super and Clubman. The Pro Class never worked well, with limited numbers on certain races meant at the end of the year there were just two people fighting for the Championship.

Clubman was introduced as a way into the series, brand new teams could compete in a separate Championship. Separate from the series quicker teams/regulars. This has evolved somewhat since the introduction, thanks to quicker chassis and engines which bring the field closer together.

Numbers are based on where you finished in your class last year. In Super, if you won – you get number 1. If you placed 4th, number 4 is assigned to you. If you are new, you get the next number in line.

This gives everyone an idea of who they are racing with on track.

So where should you as a team be placed? It’s a good question and something I can’t answer until we actually see your team on race day. Typically any new team to RHPK are asked two questions

Have you raced at Ryehouse before?

How long have you been Karting for?

Although these questions seem a little vague and basic it gives us a good idea of where to sit you for your first race. Any new team are subject to a two race probation, obviously if they go ahead and stick the Kart on pole then we will promote for the next round. 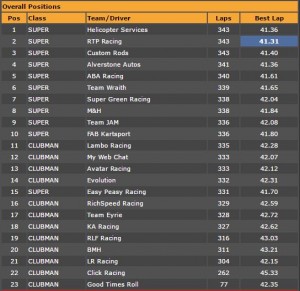 The start of 2014 was a key example on getting the system right. It was the year that saw the T2 engine which brought the racing closer together. In the first couple of rounds we saw a few Clubman Teams on the front row of the grid during qualifying.

In the end and after a number of hours running through laptimes, we promoted 5 times up to Super.

I called round each of them to explain why they had been promoted and how they felt about it. The next race we had a impressive 50/50 split and positive comments from all teams.

Since 2014, I’ve been running through results each year to ensure everything is balanced. The Alpha Timing system makes life far easier than before, as I was requesting up to 10 teams paper work for the first two rounds.

It’s not fair to promote teams just based on a result, there are many factors such as teams dropping out in front e.t.c. you have to delve a little deeper into the times…

Just an example, but here 7 random laps are picked

Just an example above, but over the duration of the race I’ve picked 7 lap times then averaged them. Going forward, more laps will be fed into the average, but gives you an idea on how we try to keep the racing close. Some of the random times, such as Pit stops and anything over 50 seconds + are removed (See Focus Racing lap 100)

Over the first two races of the season we will use the averages to gauge whether teams need to go up. Times, results and a number of conversations are had before any decision is made. We also look into what teams are racing who and what the competition is like, are they going to walk the Clubman Championship, who are they racing with? e.t.c

After teams have been promoted, they cannot be put back into Clubman – unless their driver line up changes significantly.

ITS Racing & Team Wraith were promoted a couple of years back, last round they placed third and forth overall! Team Wraith have just been recently promoted since they won Clubman last year, this year you can see their Average pace matching that of most of the supers above – fantastic job. 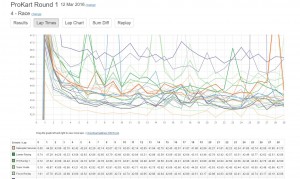 All of the lap times for all teams are available via the Alpha Timing website, use the button below…

All teams are contacted privately on the phone before any decision is made. In the past, after looking through the numbers, results, feedback and the conversations, in a number of cases we’ve decided not to promote.

I still can’t stress enough on how being promoted is such an honor for the team and the drivers, to be seen as vastly improved or competitive against the super class.

We want everyone to be competitive within RHPK, after all the series is based around all of our drivers. We want everyone to enjoy and to have fun. I just want to add, that no decisions have been made for 2016 and that all of the examples are just explaining how the system works. If any team are promoted this year – it will be announced before round 3.

If you have any comments, questions or suggestions – please drop a comment below.