This month we welcomed a new team who are no strangers to Ryehouse and RHPK. Gary Beamish previously ran the RHPK (Formally Ryehouse Prokarting Series) back in 2001-2004. Gary introduces “Too Many Pies”

When I ran the series back in 2001, I was part of the team, Bitten Heroes with Ken Jones, we started at the back and finished upcoming 3rd in the championship on a very small budget!

Whilst running the Championship we made the change from Devinson tyres to Bridgestones – what we run today. We managed to increase the grid from the mid-teens up to approx 20-25 teams.

I was famous or infamous as the loon that took a hacksaw to a very new Devinsons sprint chassis and created the one and only Devon! They said It would not work, but I proved them wrong as the team and kart were running at the top of the field despite being on a very small budget.

I am racing with my Son, Jordon who is new to competitive owner-driver karting. He’s taken part in a couple of arrive and drive sessions at Lakeside Karting. We are both well over the minimum weight – both being way past the 210kg mark. 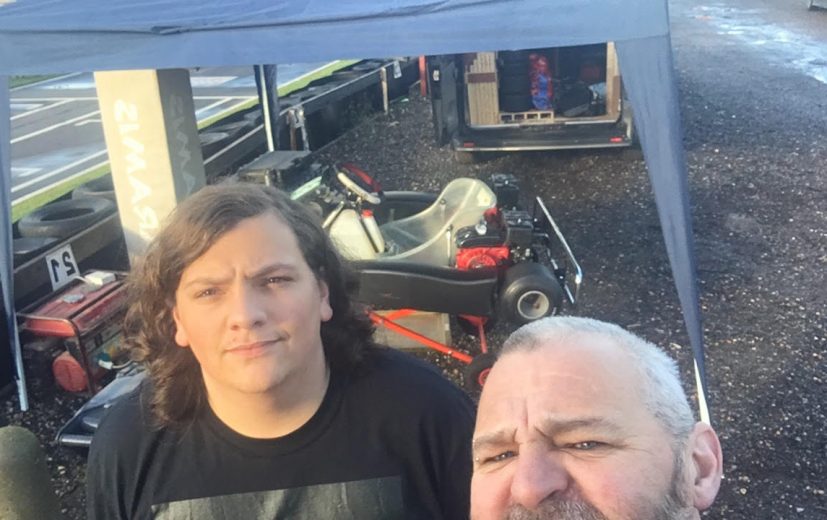 Father and son, Gary and Jordon

Our kart is a very old SWRD chassis running the older GX160 T1 engines –  most of the ponies have escaped and been replaced by a three-legged donkey and a physically challenged goat with a stone in a hoof!!

We both suffer from repetitive strain injuries from the pointing to faster karts to go around us!

Too many pies reflect on our size and the point of our karting is for us Fun and with a capitol F
During our first race we had so much help from so many people and hopefully, we didn’t spoil too many people’s races. We are slow, but we will get faster but whatever happens, we will continue to have fun and smile !!!!

Gary Beamish
Too Many Pies #68