NMA Racing, formed of Elliot Mason, Mark Roper and Adam Roper give us a brief overview of their season so far. Elliot who previously raced for M&H joins the two brothers this year to put up a fight for the 2016 Clubman Championship.

So three rounds in, You won the first round of the season, your currently sitting in second in Clubman – are you feeling positive about the rest of the season?

It was certainly a fantastic March and April (1st and 2nd in class). May a little less so due to {weigh bridge whinge…} and getting caught up in a few mid-pack quarrels as we came through lapping a few karts which unfortunately left us driving what felt like a tank come the halfway stage. Our pace in practice for May was really pleasing though, so the potential is certainly there.

Although we’re not the quickest in class, we’ve always found race pace consistency has been a big strength of ours, so we need to get back to that in June and through the summer and we’ll end the year in a strong position.

How did you get on during May? What did you think of the event which made RyeHouse ProKarting History?

The event in May was great. Close racing through the field should make for good TV and hopefully that will make the series even stronger as the year continues. As previously mentioned, May wasn’t the best round for us, but it was certainly fun to be a part of all the excitement!

Last round saw Burton Power Racing stepped up the game, put it on Pole and Fastest lap – a real push from them so early on in the season. What are your thoughts and do you have an answer?

Certainly as a new team they’ve got on it pretty much straight away. Having experienced drivers certainly helps a new team get up to speed quickly.

We’ve more or less covered them so far this season albeit it has been close on occasions. We finished ahead of them in the first two races and it would’ve been close in May had it not been for an unfortunate weight penalty. Its pretty tight and should be a good one to watch.

Can you beat Amigos?

You have to say on race pace they have looked extremely quick. We need to keep improving at our end and make sure we’re there to pick up the points if they get into any problems.

Question for Elliot, so last year saw you driving for Super Team, M&H – How have you found the jump into the new team and different class?

Well it started in the best possible way, with a win! I noticed from the first round that without the red plate, other clubman karts weren’t as easy to overtake anymore, understandably as we are their direct competition. I had a bad first stint in May, I got squeezed between two karts coming out of stadium which caused me to drop a couple of places, after recovering I slowly caught and passed Burton’s only to clip a spun kart (Team Eyrie) at the hairpin. This was completely my fault, the kart in front of me waved me to the inside and as I pulled out there was Team Eyrie, I judged the gap and my speed wrong and we made contact. This allowed Burton’s to pass again for the lead. I had nearly closed the gap to Burton’s when we pitted and I was found to be 0.5Kg under weight which is still a mystery and overall cost us 12 laps. 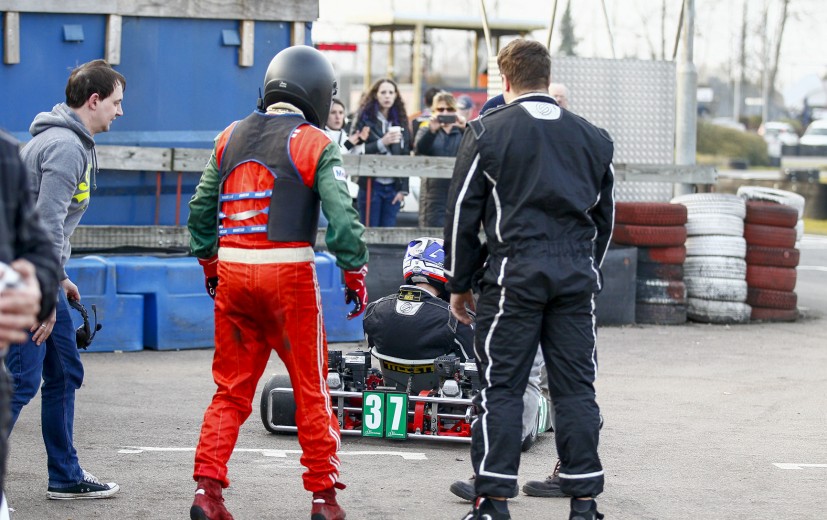 Other than that, I am enjoying the challenge of Clubman, we’re making a few changes here and there, getting the kart a bit better each time out. I would like to be up the front and challenging for overall podiums, but it’s nice to be able to challenge for class podiums and I’m looking forward to a few on track battles with Nick Griggs especially.

Your top three 2016 Season predictions, both in Super & Clubman

Racing Achievements
Mark and Adam Roper – diddly squat, only started racing 18 months ago in RHPK. Elliot Mason – Started racing Ministox at Rye House aged 11. Raced in the MG Trophy and won his class. Also raced in Formula Ford. Raced in the RHPK series at Rye House for the last four years.
Points of note
Neil Roper (father) worked in Formula One for 25 years and worked closely with Ayrton Senna at Toleman.
NMA Racing