There have been several engine blow-ups this year, more perhaps than I can ever remember happening in a season before. These have affected both our major engine suppliers, and have been caused by con-rod failure. This too, has previously been quite an isolated incident. Obviously, for all of the engine builders, development is an ongoing affair, forever trying to extract a little more performance out of this engine. Since the original engine design called for an rpm ceiling of around 3,000, you can see that this engine is now operating at about twice its original design criteria.

Apart from the obvious cost implications of a blown engine, I believe there is a serious safety implication when an engine grenades itself on the circuit. So far, nobody has been injured by flying, red-hot shrapnel, but this a serious possibility in such a situation. Additionally, of course there is the possibility of leaving a few hundred mls of warm oil on the racing line. So far this year we have been fortunate in as much as all of the broken pieces of engine have exited via the top or front of the engine. Had a con-rod alighted through the bottom of the crankcase, the outcome could have been very different! Do you fancy hitting oil as you turn in for stadium? I have only witnessed one such incident at a fast point on a circuit (turning into the pits corner at Lydd) but the outcome wasn’t pretty, for the half dozen or so karts immediately following. 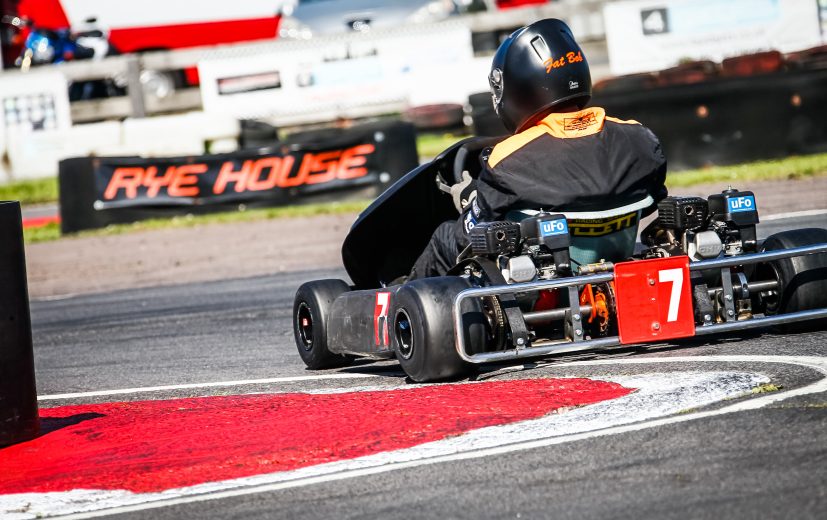 One simple and economical way of helping to alleviate this problem is to alter the gearing stipulated in our regulations. Probably taking one tooth off of the rear sprocket would drop our highest rpm by 100 at the highest-revving parts of the circuit. Certainly, the cost of two sprockets is the cheapest option, and much easier to instigate than any suggestions of engine mods and the like, which would also carry much larger implications for Honda engines across the board.

Usually, I know that Mark looks to make any changes to the regulations at the end of the season but in this instance, I feel there is good cause and reason to make a more immediate decision on this matter. Of course, the current gearing will be used for round 7, but I am going to ask Mark if he would like to have a show of hands on this matter at the drivers briefing at September’s round with a view to changing the current gearing to 70 from Round 8 – October this year.

Might I suggest that, when you rebuild your back axle, you cut a couple of holes in your sprocket protectors so that they will align with the marks on your new sprockets identifying how many teeth they have. Providing I can see a proper manufacturer’s mark and number I will probably not ask you to strip your sprocket down during scrutineering