The long awaited last round of the season. Despite the championship being won by Helicopter Services and JND Racing for Clubman – many teams were deadlocked in points. Clubman saw 4-5 teams all battling for position in what would be there overall 2017 Championship this year, but also their potential team number next year for the 2018 Season.

As the season draws to a close a number of key teams are absent this month, ABA Racing left without a kart after cracking the chassis last month. GKD was going to sit out November in preparation for the full 2018 Season which they have already booked! Team Karting Magazine was absent and KA Racing was on holiday this month – despite a large number of regulars the grid looked mighty strong as 29 karts lined up on the dummy grid in preparation for this month’s action-packed race.

The final round was sponsored by Ryehouse Kart Raceway and would be filmed for Motorsport TV, the 3rd one this year – You can find the other two shows in our Gallery section. 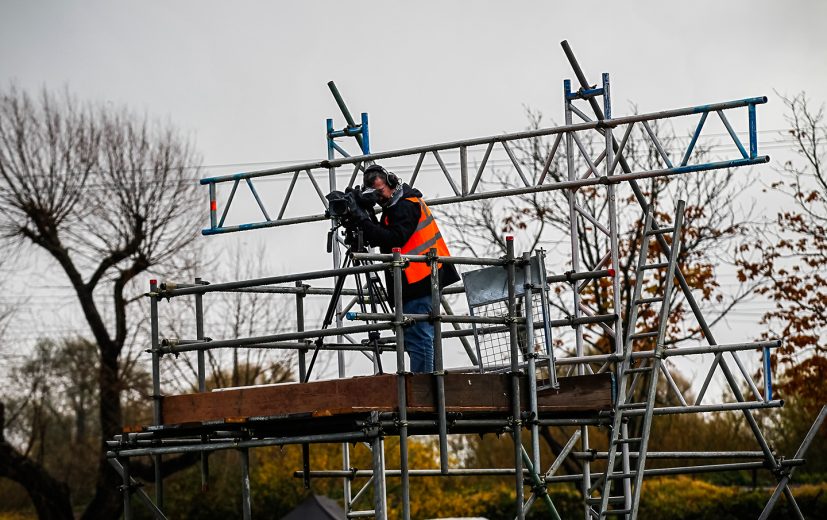 The final was filmed for Motorsport TV

This month we had the very special Burton Powered Rally Escort driven by Ashley Davies who won the BTRDA Championship this year! Ashley would not only be putting in a couple of demo laps before the start of the race but would be driving for Burton Power Racing this month.

For the last time this year we held a competition to ride as a passenger in the car. Over 30 entries were submitted. Chris McCarthy pulled Graham Dorling out of the hat. The second ride went to Greg from Polish Lambo’s son as it was his birthday weekend. 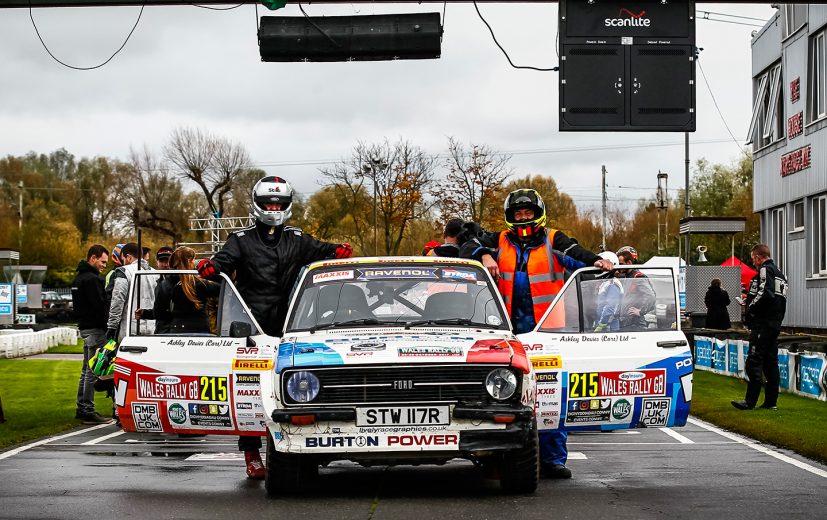 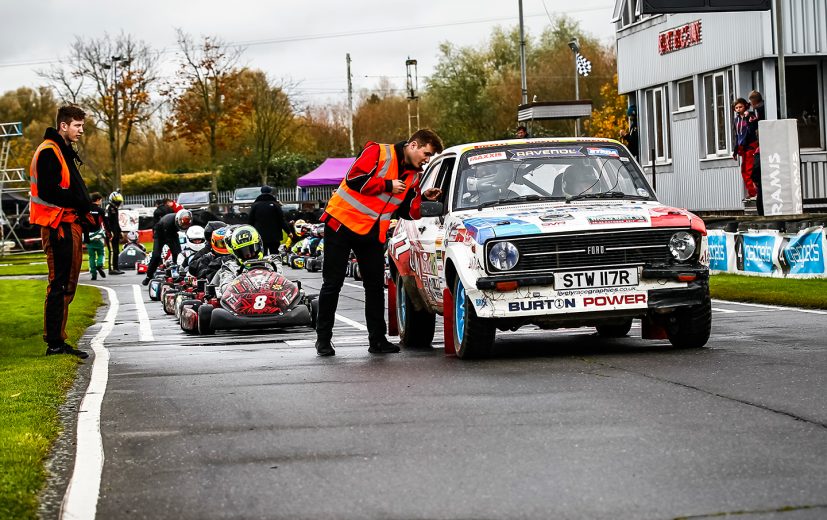 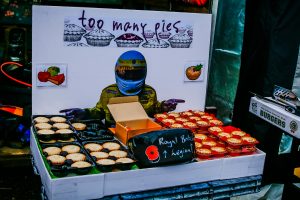 This month the Saturday Sasauge Fest was sponsored by Burton Power Racing.

Team Too Many Pies also brought a large number of pies for all of our teams to raise month for the Royal British Legion. In total, we raised just over £118!

The showers in the morning ensured the track was still wet, our earlier qualifying timing of 11:30 – 12:00 also played a part in the tracks conditions.

Early indications saw JRH Racing looking strong with a 4th place. However, conditions were quickly changing and a decision to remain in the pits cost them as they dropped down the order to 10th.

Custom Rods was swapping lap time with Lambo Racing for the top spot of the grid. But pole position went to Lambo Racing with a time of 49.860 – the only team within the 49 second lap time. Custom Rods took the second spot on the grid with a 50.027, HRS Racing 1 managed to qualify on the second row of the grid with an impressive 50.294.  Amigos managed a 4th place, sitting next to the HRS.

Helicopter Services were on the back row of the grid by posting just one lap. A tactical move for the cameras from the back?

In Clubman Polish Lambo stole the show with a fantastic qualifying time of 50.466, 2 tenths ahead of their rivals JND Racing who were just behind in 2nd (5th and 6th overall!)
Artifex Racing secured a very impressive 3rd in class with a time of 50.936 and Amigos 2 just behind, 4th in class.

This month Evolution’s Paul Allan joined forces with Richard Hawcutt from Stickies to form Evostick! They qualified 27th – in front of Helicopter Services!

The track had been drying since qualifying, there was no further rain forecast for the afternoon. The all-important decision left a number of teams up and down the grid waiting until the last minute to get their karts out on the dummy grid.

We saw a real mix of tyres, Lambo Racing on pole opting to go for brand new slicks, Geoff was quoted on the grid saying “Give it 10 minutes and the track will be dry” this would haunt him for the first hour.

11 teams started on wet tyres, 18 would start on slicks.

Further drama on the first hairpin as Unversial Racing spins on the apex.

Helicopter Services is the highest mover after lap 1, taking 12 places on slicks. Lambo Racing dropped 22 places on the first lap thanks to the kiss on the tyre wall.

Lap 2 and not only is Polish Lambo leading the clubman pack, but are 2nd overall.  Amigos 1 & 2 are locked together 3rd and 4th place. 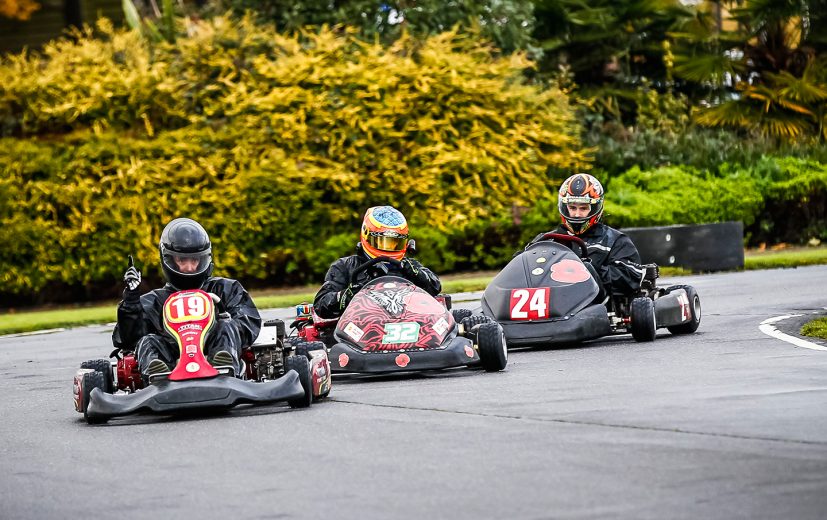 Despite the first lap coming together with Lambo Racing, Custom Rods is chasing down hard – now up to 6th place.

Team Eyrie also jumped 9 places on lap one are now sitting in a very comfortable 8th place on wet tyres. EvoStick are up to 18th, jumping 4 places on lap 2! Incredible performance from the team who started near the back on wet tyres.

Lap 7 and Amigos make the move to take first place from Titan Motorsport and HRS1 take 7th place from Team JAM. Too Many Pies are in 11th place!

Lap 11 disaster for Polish Lambo and Amigos as they both are issued a black flag for overtaking on a yellow flag. Polish Lambo are the first team to take the penalty and drop down to 12th place.

Lap 14 and now Spectre is on a charge, just 2 seconds behind Titan Motorsport they post the fastest lap time of a 49.687 – the track evolving.

Custom Rods now up to 3rd place as they take Amigos 2, next in their sights are Spectre Racing. Jack Goldsmith from Amigos 2 hanging on to catch up to the leading pack.

Polish Lambo is up to 8th place now just in front of the charging Universal Racing who are 9th place overall, 2nd in class. Team Eyrie are sitting 4th in class and just 4 seconds behind Universal Racing. 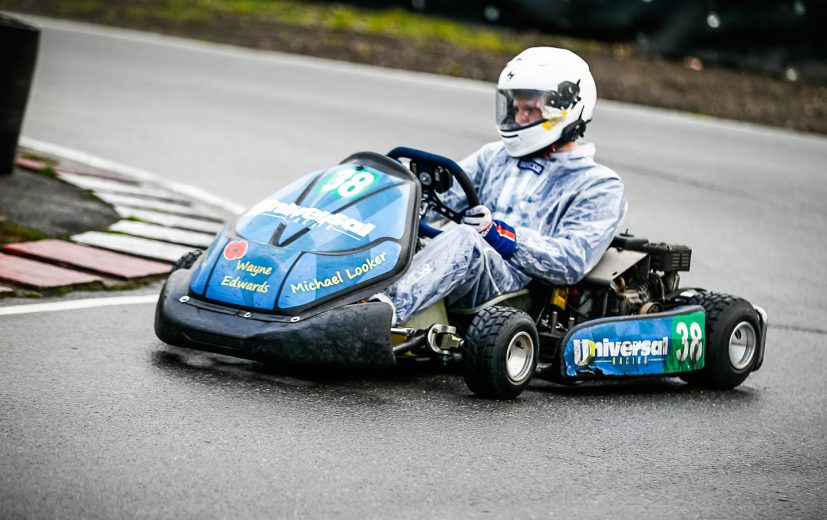 Very strong round for Universal Racing

Too Many Pies are ahead of Helicopter Services in 12th place by 1 lap.

Lap 59 and Jack Goldsmith from Amigos 2 has come alive and chased down Spectre Racing for 2nd place. Jack makes the move and goes on to chase down Custom Rods for the race lead. Lap 63, takes the lead and Amigos 2 find themselves in the lead and the quickest kart on the track. 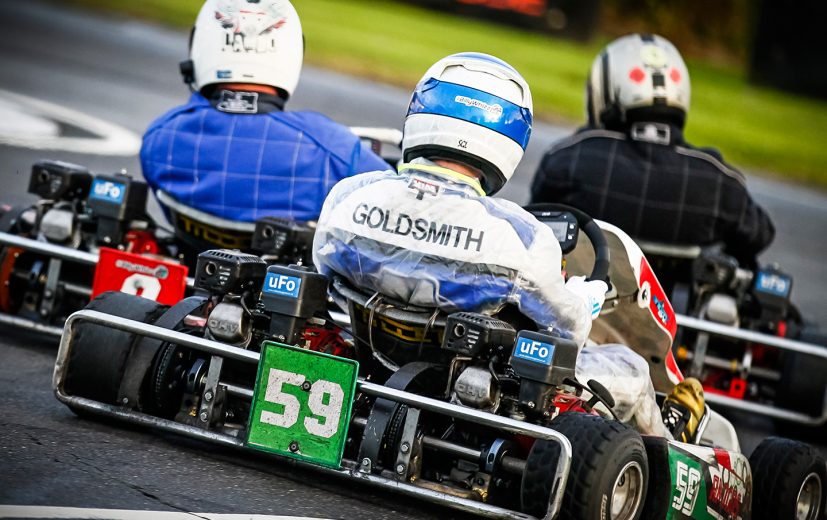 Lap 79 and Evostick has done their fastest lap, they are currently running in 4th in class and 11th overall!

Lap 80 and despite the drying track, wet tyres still have the pace. If we think back a couple of years ago, the older YDKs would be shredding – but these new wets seem to cope with the changing conditions. 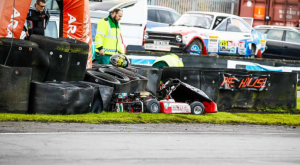 Lap 102 – a disaster for Burton Power Racing, Nick Griggs is involved in a crash at Ridges Elbow where a number of karts, including SJ Lambo, Lambo, JRH Racing & JND Racing are involved due to some water which has been brought onto the track.

The race is red flagged and Nick is attended to. He shortly walks away with a broken 3rd rib and ligament damage. We hope Nick has a speedy recovery.

SJ Lambo will not make the restart as repairs are needed to their kart and are unable to commence work until the green flag drops.

As the race gets underway it’s evident now that the track dry and the slick tyre lap times are dropping and wet tyres are becoming very slick!

“The weather definitely spiced up the action in both qualifying and the race, which brought the year to a dramatic end, even with an incident that saw Nick Griggs still walk away from” – Alex Goldschmidt

After a few laps of green Custom Rods come into the pits not only to fuel but to change to slick tyres, Amigos 2 still in the lead followed by HRS 1 who will be the next team to pit for fuel and tyres. At this point, Team JAM is running second.

Lap 116 SJ Lambo manage to get their kart back out but they have slipped down the pack and now running in 25th spoiling any chances of a decent result this round.

Lap 125 and Spectre Racing are the quickest on track, the track drying out in the later stages of the race, as drivers are constantly finding grip levels are changing each lap.

Amigos 2 Pit from the lead,  but they are slower in the pits as Custom Rods reclaims back the lead by 13 seconds. It’s Spectre Racing that takes second from Amigos 2.

Polish Lambo are now running 4th overall and 3rd in class but still, have a pit stop or two to make. 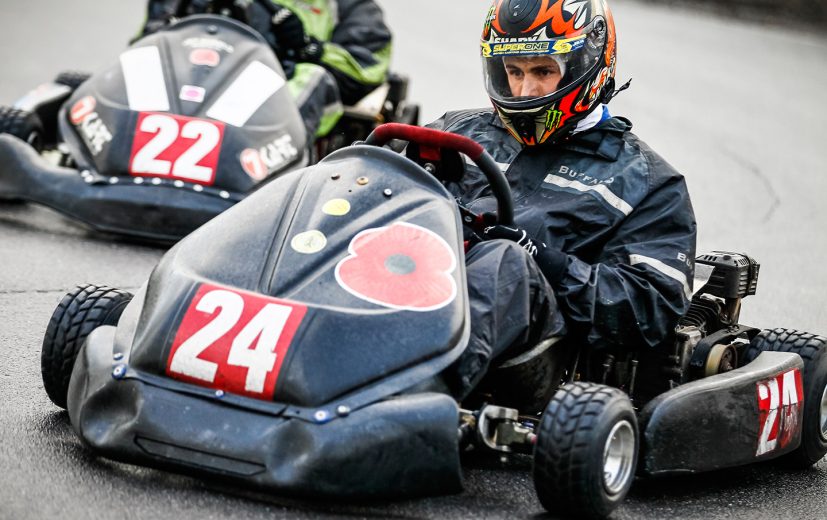 Spectre Racing climb up to second

Lap 169, Both JRH and Lambo Racing are on similar lap times to the front-runners – if only they made the right call at the start we would have a very close battle between a number of teams! RAD Racing is running a very credible 15th overall, 8th in class.

As the race comes to its conclusion, Custom Rods take the win! The hard-charging Spectre Racing take a fantastic 2nd place, by far their highest result this year. Clubman front-runners, Amigos 2 take a stunning 3rd place overall and first in class, Titan Motorsport take the 4th spot and Team JAM secure the last place on the podium with a well deserved 5th place!

Amigos 2 take an incredible win, a stunning drive by all of the team – including that push to lead the race by Jack Goldsmith. Polish Lambo take a well earned second place. Another outstanding drive this month, Universal Racing taking 3rd spot – the newly formed team at the tail of the year must be over the moon. RHPK 2017 Clubman winners, JND Racing take 4th despite the wrong tyre choice. Team Eyrie Also secure the last spot on the podium with a 5th place – 11 places from where they started on the grid!

After an immaculate season for CET, in the last 3 minutes of the last round of the season they had to retire – their 100% finish record in tatters! A real shame for the guys who have had a fantastic year this year.