With the end of the season fast approaching, leading to some very mixed weather conditions. Round 7 was forecast for rain throughout the race. Two teams, unfortunately, pulled out, the highly anticipated SMB Racing and  7 4 Hire.

This month we welcomed a brand new team, “Too Many Pies” headed up by Gary Beamish who was looking to return to RHPK after taking part in the early years. We also welcomed back Clinton Bell, Clinton used to work at Ryehouse and was clerk of the course for RHPK. Reece Shepherd joined forces once again with Team CET – we possibly may see him stay with the team until the end of the season. 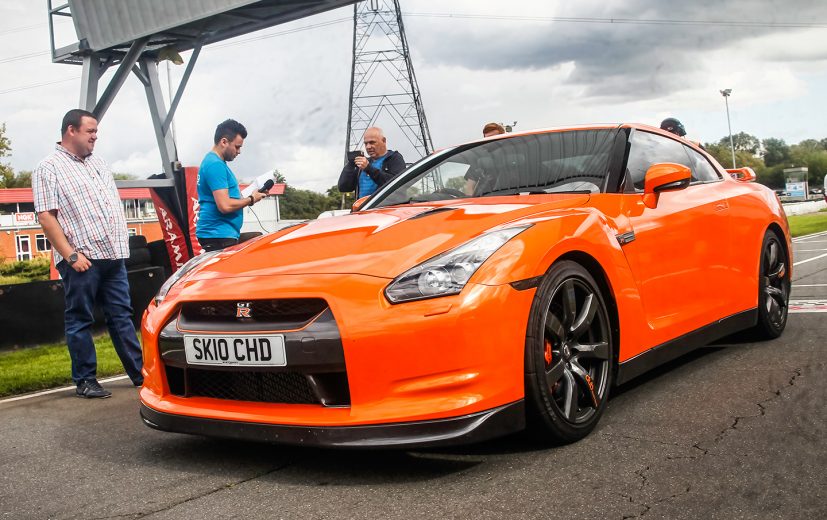 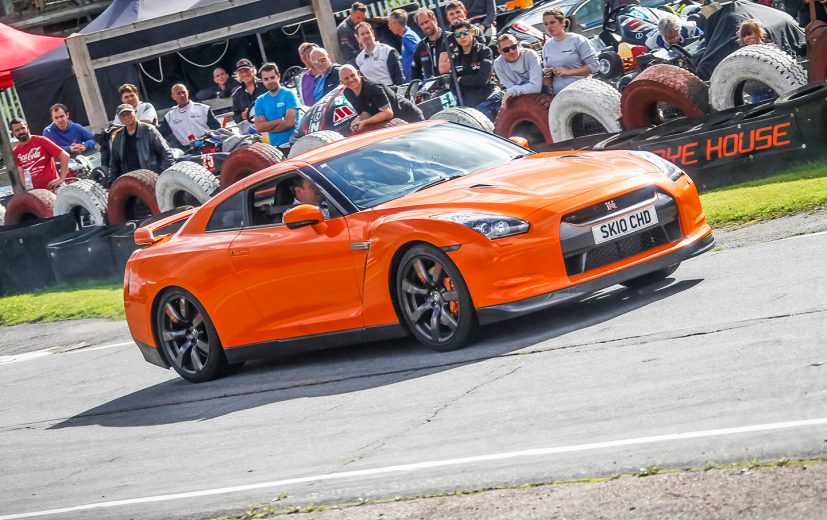 The drama unfolded before even qualifying started. The first practice got underway on a damp track, as the session progressed the track started to dry. Just as drivers were starting to drive dry conditions some water was brought onto the track and the session was red flagged as 5-6 karts ended up in the barriers at ridges elbow. Among the teams were Custom Rods, Team Lambo and Amigos. 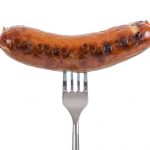 This month the Saturday Sausage fest was kindly sponsored by Alverstone Autos and Silverline Racing – cooked to perfection by the Lambo camp once again!

The track saw some light spots of rain just as the qualifying session started! Teams flocked to the track to get a lap in before any potential rain – however, it was not to be – the rain never came ensuring the session remained dry.

Helicopter Services secured pole position with a time of 41.691, frequent pole sitters this year ABA Racing had no response and had to settle for second with a 41.759. Titan Motorsport managed 3rd with just 11 laps completed in qualifying, a 41.824 and RPM1 just behind with a 41.857.

In Clubman Time Crisis take pole position with a 42.284, a fraction behind was Amigos 2 who look to be having a very strong last half of the year with a 42.298. March Racing took the 3rd spot with a time of 42.386 and a notable performance from Silverline Racing with a 42.392 which was achieved quite late in the session, lap 34. The team looks to be getting quicker and quicker this season.

All 33 karts make it round the first corner without incident, Custom Rods jump ABA and RPM at the start to take 3rd. RPM losing out on the outside of the track, down to 9th place at the end of the first lap.

March Racing have a very strong start, taking 3 places to be leading the Clubman class into the first lap.

KA Racing gained 5 places on lap one, taking them up to 21st whilst Artifex losing out on 10 places.

Lap 5, Stuart Allen from Spectre Racing takes Amigos for 5th place, the team really stepping up their pace this round to go onto fight ABA and Custom Rods.

The forecast rain is getting closer – as the clouds are getting darker. Lap 17 saw some heavy rain catching a number of teams out. Titan Motorsport have a big off going into Pylon, taking damage which would eventually take them out of the race.

RPM1 making most of the rain, taking both Spectre Racing and ABA Racing on lap 18, trying to claw back after their start. On the same lap in some very tricky conditions JND Racing take March for 3rd in class.

Tactics comes into play in these tricky conditions, many teams making an early call to pull in the pits for wet tyres. Artifex Racing, Polish Lambo, JRH Racing, Silverline Racing, APL Too & KA Racing all pour into the pits to change tyres. 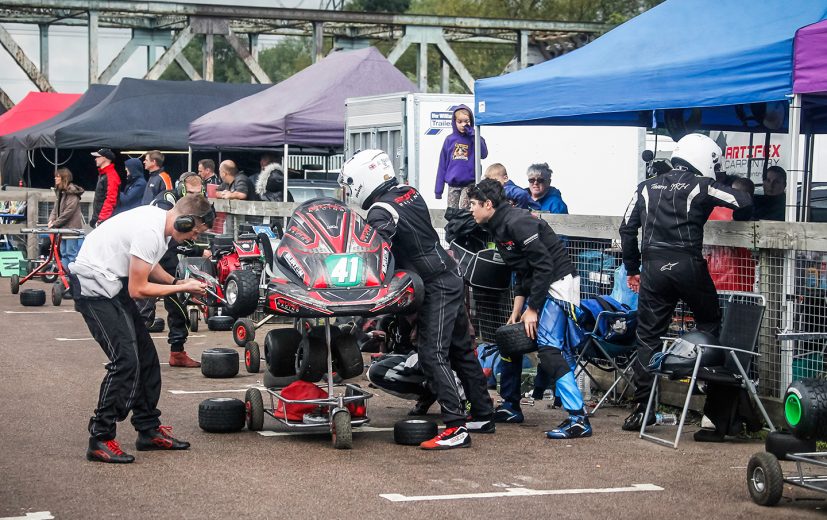 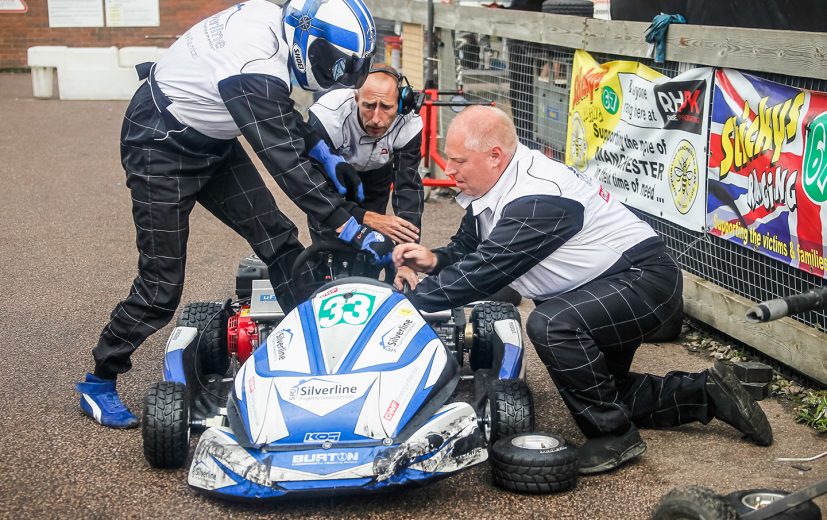 JRH Racing have issues whilst swapping over to wets, unable to get the wheel nuts off the hub. Despite their efforts they cut their losses and stay on slicks after losing 9 laps (8:05.848) in the pits.

Lap 28 – the rain has stopped and the track is already starting to dry. Disaster for those who pitted. Many on wets are just matching times on slick tyres.

Time Crisis and Team Lambo are locked into a very close battle for 9th and just further up the road Stuart Allen, Spectre Racing is locked into a battle with Custom Rods for 3rd place.

Disaster for TNR Too who seem to spin on some water on the track into Stadium and went backwards into the tyres. The race is red flagged whilst Matt Tucker is attended to. He is well, just a little sore from the impact. The kart would later return to the track.

As the race gets restarted, there is more drama on the warm up lap, as Mark Beaumont from Custom Rods spins whilst warming up his tyres on… <*a Banana skin?> a completely dry track!

As the race is restarted there is a 3 way battle for the lead involving Helicopter Services, RPM & Spectre Racing.
Amigos 2 is leading the Clubman pack and go on to take Team Karting Magazine for 6th overall, 1st in class. Polish Lambo, Silverline & Artifex Racing are down the field due to their tyre change at the start of the race.

Towards the end of the race Team Karting Magazine was involved in an incident which put Luke Cousins in the tyre wall at Pylon. The race was stopped once again whilst the medics attended to Luke. Luke is well, just very shaken – we hope to see him next month! 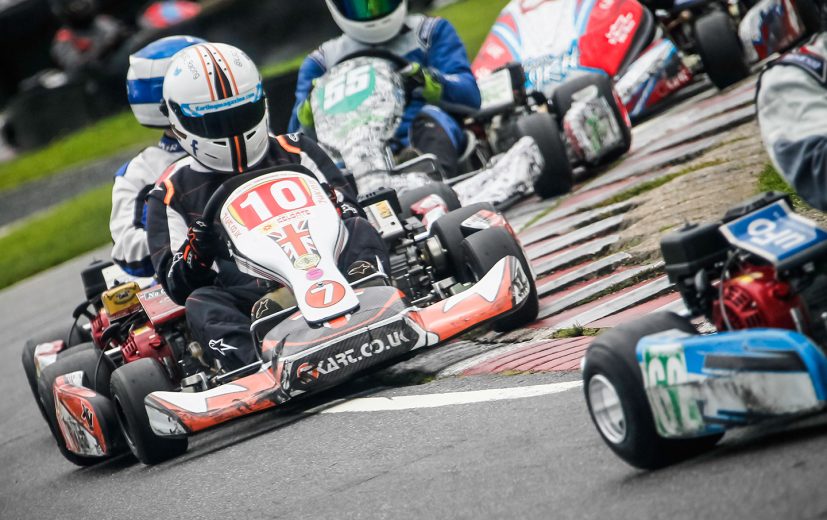 More drama unfolded after the restart as RPM1 had a mechanical defect followed by a black flag after some contact with Helicopter Services saw their race written off.

As the race entered the closing stages it was clear that we would see a fight to the finish in Clubman. SJ Lambo were chasing down JND Racing for 1st place in class. The battle started with just 10 minutes to go until the end of the race, it was clear that Darrell Lowe had the pace but could he make the move in time?! Jaunius from JND was not making it easy for Darrell – tight driving and defending resulted in some very close racing. With less than 5 minutes to go Darrell lined himself on the outside for the second hairpin, previous attempts on the outside had proved useless – Darrell went for the undercut and made the move stick! He came past with just 4 minutes left on the clock. JND could not return the move and SJ Lambo passed took the chequred flag for their first Win!

Helicopter Services took their second win of the year, extending their Championship lead once again! Custom Rods took the second spot. After some fantastic driving by GKD – they took the 3rd spot on the podium, their highest position this year! ABA Racing took 4th and Team Amigos who look to be back their where they belong took the last spot on the podium, in 5th.

SJ Lambo took their first win – a fantastic win for the team considering their luck this year in RHPK. A very special moment as Darrell jumped up from the kart to celebrate with his team mates, Nick & Jo. Exactly what karting is all about. For the RHPK team, this years highlight of the season so far.
JND took second place, once again scoring high for their 2017 championship charge, just 2 tenths behind. Team Time Crisis took a well deserved 3rd place. Team CET took the 4th spot on the podium, the team once again on the podium this year with an immaculate reliability record. Burton Power WAGS the last spot on the grid with 5th.