Round 6 proved to be yet another quick selling round. This time in a record time of less than 15 minutes. The drama started to unfold instantly as 3 regular teams, including Team Lambo and SJ failed to make it into the lineup. However, they were in luck – a couple of teams had to pull out due to other commitments meant they had secured their place once again on the grid.

Despite the fully booked grid, we were missing some familiar faces. SJ Lambo’s Stephanie Lutteridge was racing at the Teeside Karting British 24 Hour with Northampton Maidens, eventually placing 7th, whilst Team Karting Magazine was reduced to just two drivers, as a result of illness striking down Luke Cousins. Artifex’s Adam Nelson still came along but was resting under doctor’s orders following a trapped nerve in his neck. RPM Racing’s drivers were missing due to the British 24hr at Tee-Side.

Universal Racing taking over the spot previously occupied by ZJ Racing. The #38 Clubman entrant would welcome back Josh Harrison and Wayne Edwards, who were joined by newbie Michael Looker.

Worst Pace Scenario would also make their RHPK début in the Clubman class, but the biggest news has potentially caused a “Supermarket Sweep” rumor across the paddock was the move made by Lee Kemp from Clubman leaders JND Racing to Polish Lambo for the remainder of the season.

This meant Daytona DMAX regular Tor Ryan would step in alongside Jaunius Zukas and Thomas at JND Racing, with it being the first time for a few years that Ryan would have been behind the wheel of a Pro Kart.

Round 6 saw a distinct change to the usual ‘pace’ car, as RHPK was graced with the presence of two demo cars roaring around Rye House in their own unique way.

First of all, Gary Beamish brought along his type-approved, Red Bull Racing-liveried F1 road car replica. Powered by a ZXR 1400 engine, producing 220bhp, this two-seater beast is able to accelerate from 0-60mph in 3 seconds, with a top speed of 160 miles per hour. 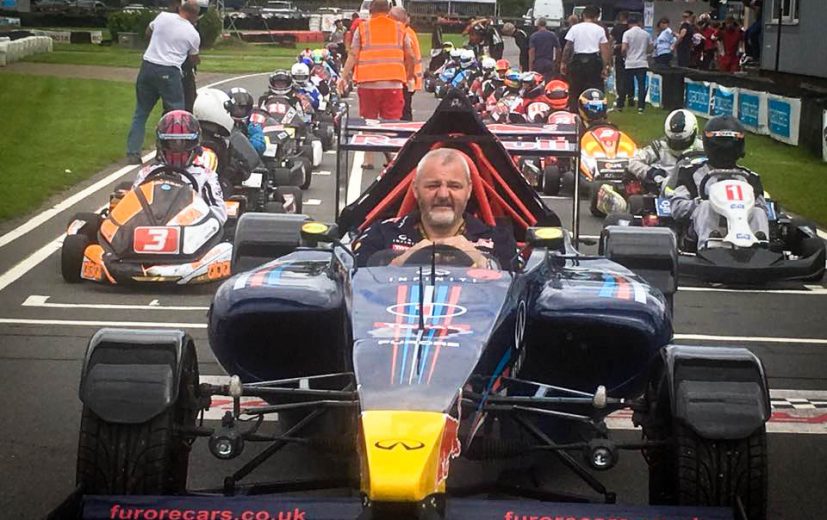 We also were graced with the presence of Birmingham’s ProDrift Academy, who brought along their GT-R R35-nosed Nissan 350Z to wow the audience with a show of sideways motion around Rye House.

The Academy itself put on a full-throttle, tyre-burning display in the Japanese import Nissan, and are also credited with having helped NISMO take the World Speed Record for a sole drift in a GT-R in Dubai at an astonishing 194 miles an hour. 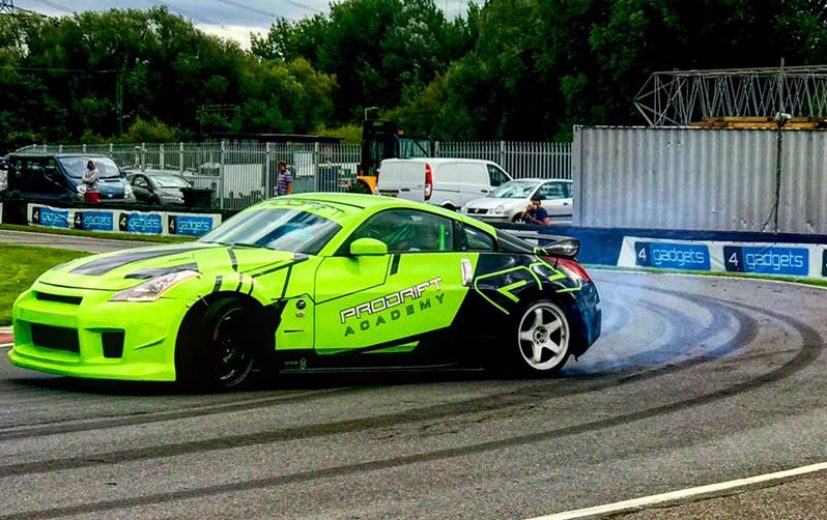 With all that said and done, Alex Goldschmidt, our commentator for this round, did the Famous Grid Walk as is customary in RHPK, but due to sound difficulties, we’ll have to wait for the next one in Round 7 next month. (Sorry guys, microphone problems! – Alex)

With weather conditions initially stumping the teams in terms of set up during the three hours of morning practice, the sunshine would start to beam down for the 30-minute qualifying session, which ended up as one of the most competitive of the year thus far.

Times would rapidly drop in the initial stages, before Piers Prior put in his best effort of 41.638 seconds just past the half way point, securing overall pole position for ABA Racing for the fifth time this season.

Defending champions Helicopter Services were 0.119 seconds off the time set by Prior, with Round 5 winners Titan Motorsport completing the top three. The top 11 karts, comprising of Super entries, were separated by only 0.395 seconds, with the entire 32-strong grid split by only 2.069 seconds.

In Super, HRS 1 put themselves into fourth on their 11th tour, with Spectre Racing and Custom Rods completing the top six. RPM 1, who were further bolstered by Matt and Stephen Cornwall opting to withdraw their SMB entry post-practice, put the #17 Super entry seventh at the end of the session.

Clubman saw another class pole position for Polish Lambo in 12th overall, with new boy Lee Kemp assisting to help the team to take their third of the season, ahead of the #33 of Silverline Racing.
Burton Power Racing also had a strong qualifying performance in 15th overall, helping them to complete the top three in Clubman qualifying.

At the start, ABA Racing’s Piers Prior kept ahead going into Stadium for the first time, whilst Titan Motorsport got ahead of Helicopter Services behind the #3, as Custom Rods got an electric start jumping from sixth to fourth.

With the ensuing melee sorting out the initial order behind the leaders, Polish Lambo’s Lee Kemp was already into sixth place at the completion of lap one, as teams were going almost three wide at several places.

A slight clash between HRS 1 and Titan Motorsport over second aided defending champions Helicopter Services back behind ABA, with a battle for the lead saw a five-way scrap for the front of the field take place over the first hour.

With the defending champions, Custom Rods and Titan working together, they all were able to pass ABA Racing and pull away from the #3 Super entry and HRS 1, before the first round of pitstops. 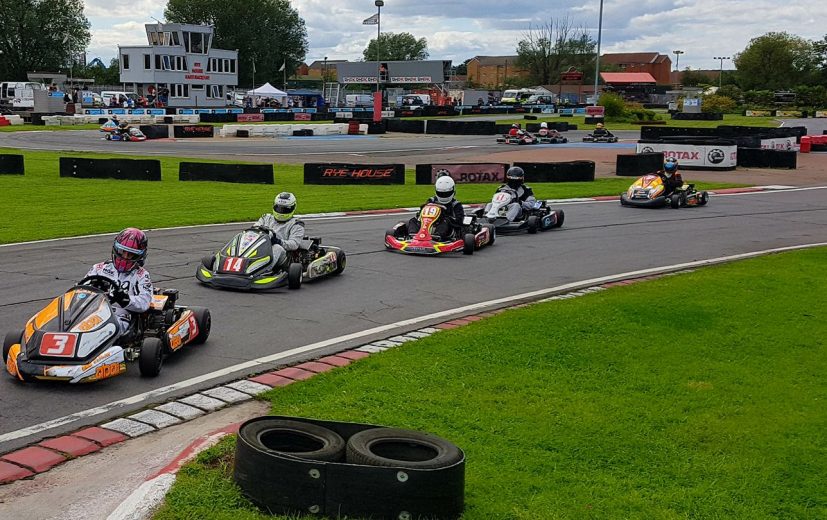 Titan Motorsport would be the first of the big names to suffer dramas on their first pitstop, as the #19 would only find that the left engine on their kart would fire up, putting them down the order to 14th and then out of the running after a second unscheduled stop shortly afterwards, finishing in 13th place.
The ABA racing pair of Piers Prior and Ben Bishop found their kart suffering from understeer for the majority of the race, as they also hit trouble in the last hour. Prior was on course to help the #3 take a welcome podium finish, but the left front stub axle failed just over 20 minutes into his second and final stint.

With new components fitted, there was a clear disappointment for both drivers, as their hard work this season has still seen them have such bad luck, eventually taking 15th place at the chequered flag.

Lambo Racing also had their dramas, with the slightest of contacts breaking the bottom lugs on their front fairing, which the team attempted to refit to the kart using duct tape, but a new fairing threw initial confusion for the spectators and our commentator, with it being noticeably different from usual. However, they would still manage to fight their way back up the order to 12th at the flag.

Meanwhile, Helicopter Services were still keeping consistent and smooth all race long, including their pit stops, with no teams falling foul of refuelling and engine shut downs during their scheduled trips to the pits, seeing the #1 take their first wn of the 2017 season by a lap over the nearest opposition.

The battle for second was an exciting affair right until the end, as both Custom Rods and HRS 1 were still playing cat-and-mouse behind the eventual winners, but with a great stint from Steve from Custom Rods put the #2 seeded Super entry into prime position to finish runner-up to Helicopter Services.

However, HRS 1 still also showed that they had plenty in reserve towards the end, swinging the pendulum back in their favour, getting their way past with just minutes remaining, and were able to finish second by 5.126 seconds at the flag.

But post-race, HRS 1 were disqualified after technical inspections revealed the engine ignition timing was outside of the RHPK regulations, with Custom Rods and GKD Racing completing the top three. Super entry Amigos would finish fifth initially, ahead of RPM 1, who were also excluded.

RPM 1 would lose what was fifth place in Super to Karting Magazine, who ended up finishing eighth overall, as a result of exceeding the maximum driver allocation for the year, following the decision for SMB Racing to withdraw their entry and Matt and Stephen Cornwall ending up driving the #17. 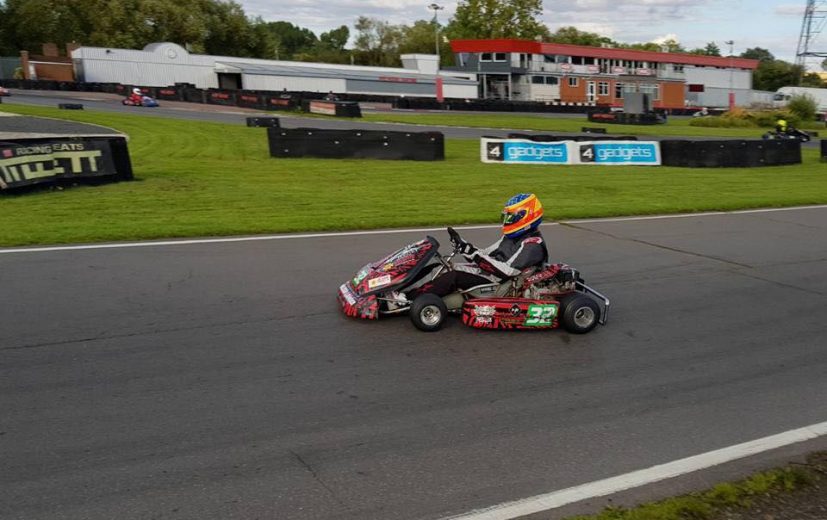 In Clubman, it was another well-deserved victory for Polish Lambo, with a motivated Lee Kemp trying to close the gap to RPM 1 in the dying stages for what eventually turned out to be fifth overall for the #32, ahead of Amigos 2.

Time Crisis, who sponsored the Saturday Sausage Fest with Kelvin Nicholls, completed the Clubman Top Three in what was 14th place, having started way down the order in 31st place after a difficult qualifying session.