Kelvin gives us a brief outline of a very special award he will be presenting this year.

I have been associated with the Premier UK or European Endurance Championship in one capacity or another for longer than I care to remember. In the early 90’s, Bob Pope run it for a while, followed by Dean Hall, Ted Poole, Dave Trueman, Paul Bowler, Martin Capenhurst and more recently Bob Pope once more. For next year I understand it will have new operators.

When Ted Poole ran the series, he was ably assisted by his lovely wife Sue, and she soon became everyone’s favourite girl; Always smiling, nothing too much trouble, a real pleasure to be around and race with. Sadly, she succumbed to a vicious bout of cancer while still young, leaving behind two girls and a devastated husband. Everyone in the paddock was equally distraught, and felt that her name should not be forgotten. Out of this tragedy, came the Sue Poole Celebration Vase. 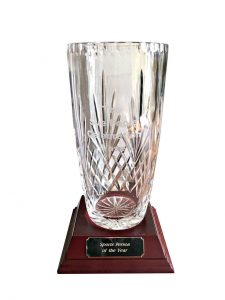 It was decided right from the outset that it should not be a run-of-the-mill trophy, for Sue was no run-of-the-mill girl. It was decided that it would go to the “sports person of the year”; not the fasted driver, nor the team with the most points, or the driver with most pole laps. In fact, it has become tradition that it has never once been awarded to a driver. No, this award was to attempt to reflect everything that Sue Poole was to the drivers. Sunny, helpful, generous, thoughtful.

And so it is that every year since 2010 the trophy gets awarded to someone in the paddock that has made a difference.

The first one to jump in with tools or parts when an opposing team come into the pits with trouble. The one that always has five minutes to talk over some issue with kart or driver.

The one that will go the extra mile to sort something out, to make the race day better. So the names you see on the base of this vase are not necessarily ones you will be familiar with, but they are the ones that made things happen on race day, and made race day a better place to be.

I have had the great honour of organising this award each year, and of presenting it to a worthy recipient. Obviously, for the last few years, it has been presented to people within the EPEC series. As I am no longer working within that series, that presented a bit of a problem! However, great people can be found anywhere, and I think we have just as many great people in the Rye House Series. And so this year it will be presented to someone from the Rye House series.

Normally, I take a poll through the year, and ask folk in the paddock to tell me who they think should be the Sports Person of the Year. However, this year, I wasn’t sure that I would get the trophy returned to me until quite late on, and it would hardly have been appropriate to tell you about this earlier in the year, and asked you to vote for a trophy I wasn’t sure I could get hold of again.

But I’ve got it, and I have taken the liberty of deciding who, in my mind, has made the greatest contribution to the success of this series this year, and given it the atmosphere that it currently enjoys. I will be presenting the trophy at driver’s briefing before the last (November) round, and I would ask that not only drivers, but mechanics, team managers and friends join us for the briefing, in order that the recipient can be seen and applauded by us all.