Burton Power Racing’s Nick Griggs recently won the Biz Karts Mini Challenge at Ryehouse – a chance to jump in the seat of a Mini Cooper and race in the series for a round. Nick

Arriving at the circuit early, the first thing you notice is the still and quiet of the place. Cadwell Circuit is set in a beautiful rolling park and woodland location, just a few miles south of Louth in Lincolnshire. There are no major roads nearby, in fact there is nothing nearby. It is literally in the middle of nowhere, and so quiet there’s not even a morning chorus from the birds. They’ve taken flight no doubt, knowing what’s coming.

As I ambled my way down to the track any apprehension I may have had quickly floated away with the morning mist to reveal this stunning race circuit. From the elevated position by the track side restaurant you can look down on a good percentage of the circuit from there. It’s not long before the aroma of fresh ground coffee and pastries draws me in…. The place comes alive with the hustle and bustle of activity as other early risers arrive. People say good morning; smile & nod their heads, friendly folk all. The orange army of marshals are preparing for when the peace and tranquillity will be broken by the screaming of engines, smoking rubber and burning fuel – the main ingredients needed for us petrol heads to feed our addiction to motorsport. What a fantastic circuit this is, very narrow, a mecca for our two wheel cousins. 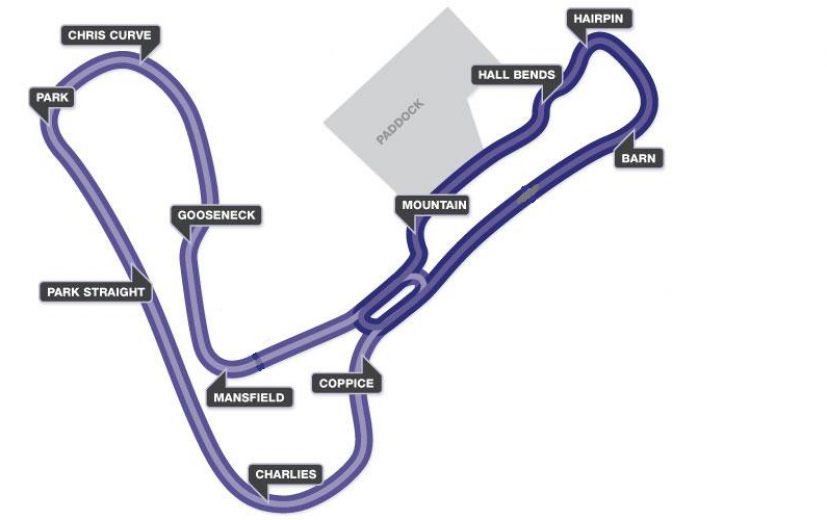 I had completed the ARDS test for my MSA licence earlier in the year at Thruxton Circuit which is the complete opposite, wide, open and flat… Cadwell Park has hills; a section called ‘The Mountain’. A corkscrew named ‘Gooseneck’…. plus a wooded section through ‘Hall Bends’ and ‘Barn’ with virtually no run-off areas before the solid Armco barriers and the overhanging trees ….  The circuit is indeed glorious.

I had heard that my Biz 7 Mini Challenge car was here somewhere, in amongst the forty foot trailers, artics and the huge awnings. It took me some time to make my way through the friendly paddock… stopping to chat with drivers and crews along the way, bumping into some familiar faces from MSVT/Burton Power Track Day Events…..  Eventually I found a Biz-7 Mini with my name on it, tucked away in the corner of the biggest awning in the paddock. 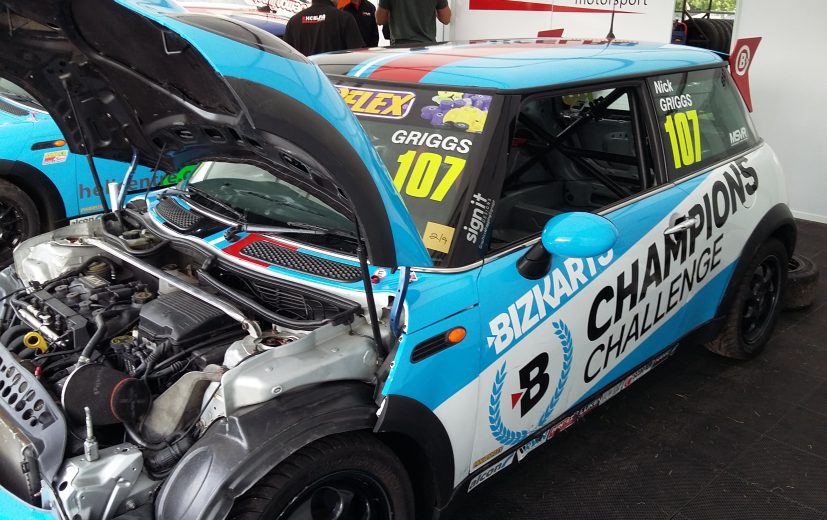 The Exceler8 Motorsport Team are to run me in the Biz 7 Mini Challenge Cooper Class car. A prize drive I had won in a karting competition at Rye House back in February, sponsored by the North London kart manufacturers.

I could not have been with a better team……The current championship leaders with their number one driver Max Bladon (champion elect) as my team mate for the weekend…. The team led by Daniel and David made me very feel very welcome straight away and introduced me to the rest of the crew, a group of very bright young fellas – Ollie, Lex, Cameron, Omar and Mikey. There were a few familiar Suffolk accents amongst them; the team is based near to my home town of Red Lodge.

They guided me through all the preparations needed for the race weekend ahead.  However they were also new to Cadwell Park, this was the Mini Challenge Championships first visit…. Without any previous data to go on, we all learnt the circuit for the first time at the same time… this was a fascinating process and brought us all together as one unit. They really made me feel like I was part of their team, involved and one of the many cogs, engaged in every aspect of the preparations.

My team mate Max was a smashing lad, we got on great, and despite the age gap we had instant rapport via the karting scene. Even though he had the pressures of maybe clinching the championship this weekend he didn’t show it. Thoughtful, helpful and annoyingly quick, talk was laced with plenty of expert tips, technics & lively banter of Mini driving knowhow. I may be a rival in the races on Saturday, but this did not stop him sharing the vital info… They even bolted a second seat into one of the Exceler8 Minis and Max took me on a thrilling twenty minute passenger ride of the circuit… This was to be of valuable help to me for my own official testing program planned for the following day.

I left the circuit to re-join the family, very pleased at learning so much during that first day to. We had been in the area for nearly a week already… staying at a holiday camp on the coast twenty miles east. A delightful and oddly named place called Saltfleet-cum-Skidbrooke. My racing preparations so far this week had been chilling-out on the beach at Mablethorpe in glorious sunshine. Tomorrow I will be back to work and the important business of driving fast around a race circuit.

Arriving early & relaxed for the team meeting the final preparations are made… Driver sign-on, my shiny new MSA licence checked with the officials, it has been over twenty five years since I’ve been granted one of those -“The fools!”… An interview with the Clerk of the Course follows, plus a chance to meet more of the other drivers during the 8am briefings. All made me feel very welcome and wished me luck.
By now I was eager to get going out on the circuit… the wait soon past as I was kitted out in all the race wear and strapped into the car…. The #107 Mini looked fantastic in the Biz7 livery…. I looked across the garage to Max in the sister car. Thumbs-up he indicated for me to follow him down to the assembly area. On route I thought his car colour scheme a bit naff… my Mini was much prettier. 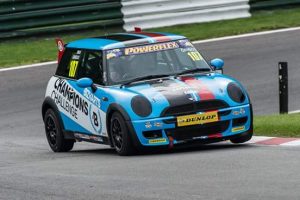 Driving the BMW Mini is not all that dissimilar to Pro-kart driving techniques…. Slow in a straight line, but with high cornering speeds on the slick tyres. It was so important to keep up the momentum with smoothness and finesse in driving style…. Max and I worked our way through five half hour testing sessions throughout the day, assisted by the very switched-on pit crew and engineers. Two and a half hours is a lot of seat time and a whole lot of data to analyse. By this time information between Max and I was flowing in both directions, meshing together joint findings – a gear change save here, a dab of left foot braking there – small bits of improvement to shave of those vital tenths.

End testing results looked very promising. Max had posted the fastest time in our class with a 01:46.8 – I wasn’t all that far behind with a fifth fastest of 1:47.6

Team Exceler8 have all the right toys and equipment at their disposal:- data logs, on-board cameras, banks of timing screens & lap charts. Very high tech – very professional… Team Principal Justina Williams has invested in her racing enterprise well. The successful past lady racer knows exactly how to lead and drive a championship winning race team forward, very motivated and full of confidence with a slender manicured finger on the pulse – at the beating heart of this team. Justina won’t be the only lady to impress me this weekend…. 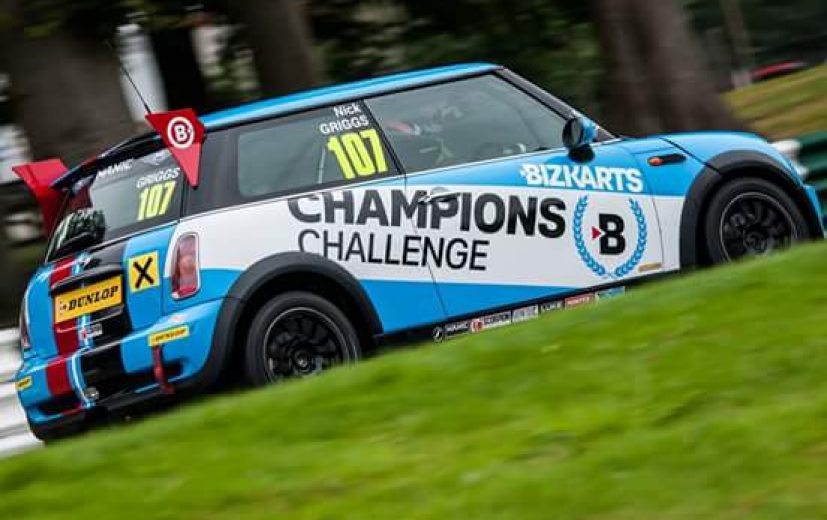 The Exceler8 Team was very happy with the progress made, especially the pit crew and my mechanics Ollie and Cameron. They carry out their well-rehearsed regular service checks and race prep – with no offs (unlike many teams, during the test sessions) the boys are relieved with no crash repairs to do. Tonight they can kick back with a cold beer for a change and watch the sun set over the hill as Cadwell Park returns to the peace and quiet. Well, apart from the odd clank of spanner, clash of hammer and expletive emerging from under the awnings of other teams as they desperately repair the crash damage of the unfortunates… All is well and good with Exceler8. I return to my retreat by the sea to enjoy a steak supper with the family and an early night.

Many thanks to David Young providing the photos.