Joining the series with only a few corporate karting sessions under our belts, it is fair to say Paul and I entered as total rookies.

We were introduced to Prokart by Lee (JRH Racing) who would enthusiastically talk about how much fun it was after our meetings. Following what can only be described as a twelve month PR campaign, he had finally convinced the two of us to get involved and Pelam Racing was formed. 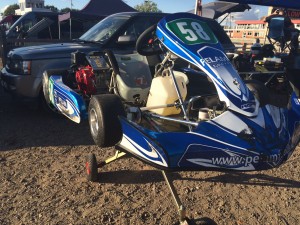 Turning up to the first race with only our race suits and helmets, we took delivery of our brand new shinny
7Kart. Over the next four hours we proceeded to put the poor girl into almost every tyre barrier on the circuit.  As you would expect, we were somewhat off the pace while we found our feet. The other teams were considerate and gave us plenty of space, and we tried our best not to be a rolling road block. This first race was brutal; we had hugely underestimated how physical it would be, particularly for a two man team. For the final few minutes it seemed as if the clock was going backwards…but we were delighted to complete the race.

Rookie Mistake #1. Following a hasty and unscheduled driver change, I learned the hard way to always check your pockets, one iPhone KIA.

Race two was really when the fun began. Having received a lot of driving advice, setup assistance and encouragement from Lee and Tobi, we were immediately more competitive.  Probably my highlight of the season was completing my first overtaking manoeuvre. In truth, I was probably just unlapped myself but that did not matter. Mentally it was a turning point, and the racing became thoroughly enjoyable. Pelam Racing finished fifth in class, our best result to date. A number of teams were kind enough to comment on how much we have improved from our first outing, which was a nice touch.

Rookie Mistake #2. I became infuriated and confused as to why I could not get the fuel siphon to work following final practice. It turned out our enthusiasm had got the better of us on track and the tank was bone dry. 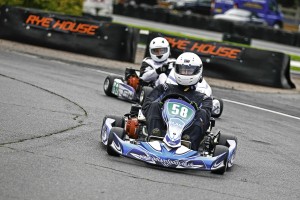 Since then we have competed in a further three action packed races. There has been 100s more laps done, plenty of overtakes and the occasional shunt (not all of them our fault). We have learned so much and yet, somehow still know very little.

The “black art” of tyre pressures being one such thing. Conditions have also been varied, from a scorching hot day to the torrential rain at the final meeting, all of which has added to the fun and challenge.

Rookie Mistake #3. While trying to dry off after my final stint, I somehow managed to set fire to my overalls despite being soaked to the skin. Luckily someone spotted my smouldering leg before things got out of hand, one ex-dry suit.

If you are thinking about entering RHPK but are still unsure, my suggestion would be come down for a race and meet some of the teams. Everyone has been extremely welcoming and always happy to assist. Whether you need some air to top up your tyres, or a drill to get rid of the small pond accumulating in your seat, there is always someone willing to help you out.  This year we will be running the number 40, and while we still anticipate being towards the back of the pack, Paul and I are relishing the prospect of continuing to improve and slowly force our way up the grid.

Finally I would like to say a big thank you to Lee and Tobi from JRH for all their support. They got us into this “mess”, but they certainly did not leave us high and dry.