Part One
Ben from ABA Racing shares his fantastic experience of GT Academy.

The hours after qualifying for Race Camp were full of smiles and pinch myself moments. Approximately less than 16 hours after qualifying I’d had email confirmation that my flight was booked with Etihad airways. I would be flying from Heathrow airport on October 3rd where I’d finally meet the other 7 contestants that made up Team UK! 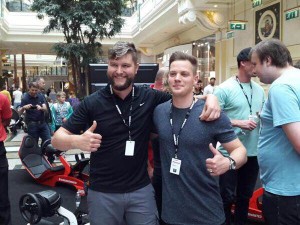 Ben top of the leader board in Manchester

Qualifying was like a massive weight had been lifted off my shoulders. My family had been with me
throughout every step of this GT Academy journey, they have always known about my desire and dream to become a racing driver and this was that X-Factor style opportunity. Without their support it wouldn’t of even been possible, they helped me buy all the gear I needed to practice, it almost felt like it was my duty to qualify just to repay them for having faith in me. Thankfully that was mission well and truly accomplished!

So what next, I had about 3 weeks of preparation time before flying out to race camp to get myself in the best possible physical condition for the challenges lying ahead, fitness being one of them! Luckily for me I was already in pretty good shape strength and health wise, my one concern was cardio though. I tend to be a bit guilty of heading for the weight section at the gym rather than the treadmill, so as soon as the Monday after qualifying came around I was straight down the gym with my training buddy Matt and after our usual routine finished I hit the cross trainer.

Each day I did a bit more on the cross trainer to try and increase my cardio capacity, the reality is I only really had 2 weeks of training left ahead of me because the week building up to race camp needed to be a rest week. Eager to prove I could improve my fitness levels and to give myself peace of mind, I started to run every evening when I got home after training. My other half Emily did question whether I was starting to push myself a bit too much, with which I replied nonsense!!

Sure enough at the start of the 2nd week of upping the training regime I over did it. After finishing “leg day” at the gym, I went and met up with my mate Danny, we were going for a 5k run around Stevenage. He’s naturally good at running so I knew it would be a good benchmark for me. Keen to keep up, about 5 minutes in my left knee started to hurt quite badly, I’d never felt a pain like that before in my knee, being a typical man I ignored the warning signs and carried on running through the pain and completed the 5k in a pretty decent time!

Keen to keep up, about 5 minutes in my left knee started to hurt quite badly, I’d never felt a pain like that before

The next morning I woke up with a terrible sensation in my left leg and knee, I was really struggling to put any weight on my left leg at all. I called up a local physio and got booked in asap to have it looked at. After turning up and explaining the issue, the examination started. It wasn’t long before the physio asked if I had upped my fitness training recently. I told him what I’d been doing which confirmed his suspicions. I’d aggravated what is known as the IT Band (Iliotibial band). Iliotibial band syndrome (ITBS or ITBFS, for iliotibial band friction syndrome) is a common injury to the knee, generally associated with running, cycling, hiking or weight-lifting(especially squats).

That was 4 out of 5 boxes ticked on my behalf then, the result meant I couldn’t train anymore before heading out to Abu Dhabi if I was to have any hope of it recovering. For a week and a half I had to do multiple stretches several times a day to loosen the tightness of the injury and use hot and cold techniques to stimulate the blood flow. The following days were up and down, somedays I thought it was getting better, then the next I’d hardly be able to move my leg! I thought I’d blown it before I’d even got out to race camp, I didn’t tell my family, only my wife knew, I just prayed all the stretching would pay off and thankfully about 36 hours before I was due to fly it started to feel much better, it still wasn’t 100% though.

October 3rd: The start of a crazy 10 day adventure, an adventure I will never forget. It started at Heathrow airport, my wife, dad, step mum and two of my sisters came to see me off, in true Bishop fashion this was celebrated with a cup of tea at the airport before I checked in.

It was nice to have some family there to help keep me calm and wish me well before I departed, I felt pretty good and was ready for the experience to begin. 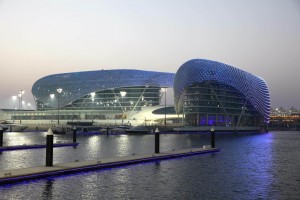 I met up with my fellow team mates after checking in, they were a great bunch. We were all very different in ways but hit it off straight away due to the fact we all loved cars and motorsport! After some media interviews for the Eurosport series back to basics it was time to board the plane, finally!

As I sat there ready for take off I had a little chuckle to myself because I came into 2015 having never played Gran Turismo yet set myself the goal of qualifying for the competition, and I’d done it, it hadn’t been easy but I never gave up. Now it was time to find out how I stacked up against the competition in the real world!

My next update will cover my race camp experience, all the challenges and the highs and lows!