Team CET, is made up of Bri Hellier, Mup (Peter Matthams) & Kev Mooney the team won the “Team Spirit of the year award, 2016” last year. The team are highly regarded in the RHPK paddock, great sportsmanship on and off the track, always willing to help anyone in need and if the 2017 Winter Cup is anything to go by – a real contender in the Clubman series this year.

Bri Hellier gives us an overview on a very special team.

Bri and Mup have known each other from School circa. 1975. Kev moved to Chelmsford in 1979 and met B + M at Kings Road School. 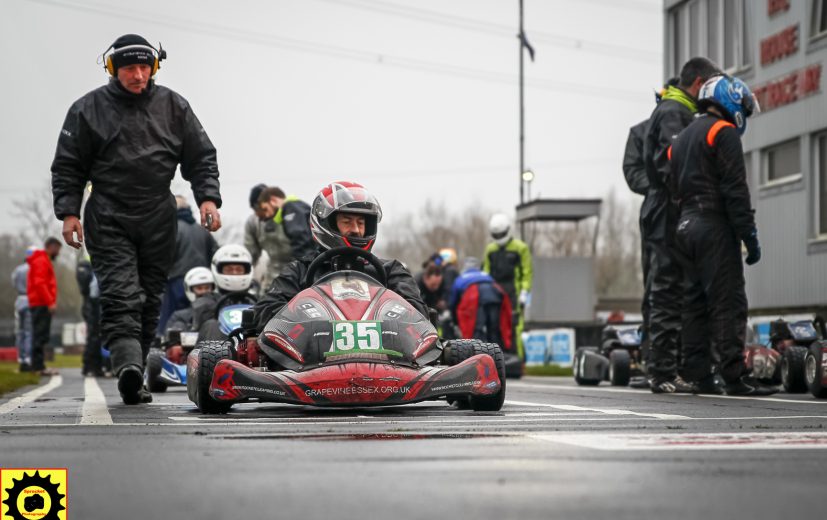 Mup sitting proud in pole thanks to the random grid in the Winter Cup - Race 2. Boy did he do a great job!

(Son of part time classic car restorer John Matthams) discovered the internal combustion engine before the age of 5, riding a battered Yamaha 80cc around his parents ‘get away’ field in Southwold. Subsequently, He and his Father built a Mini Trike (honda 90) when he was 10 – more looning around in fields… This inevitably led to Villiers 210cc Gearbox Kart (with blocks on pedals etc) and more fields!

He thought he may be quite reasonable (read – fearless) driving a kart. Evidence was 4 days before he passed his driving test in 1985, driving his Mum’s Hillman Imp, he stuck it into a Police car head on writing both off! Obviously out braked himself, the poor Imp and the Cop Car – a trend that wasn’t really shaken off ’till July 2015! 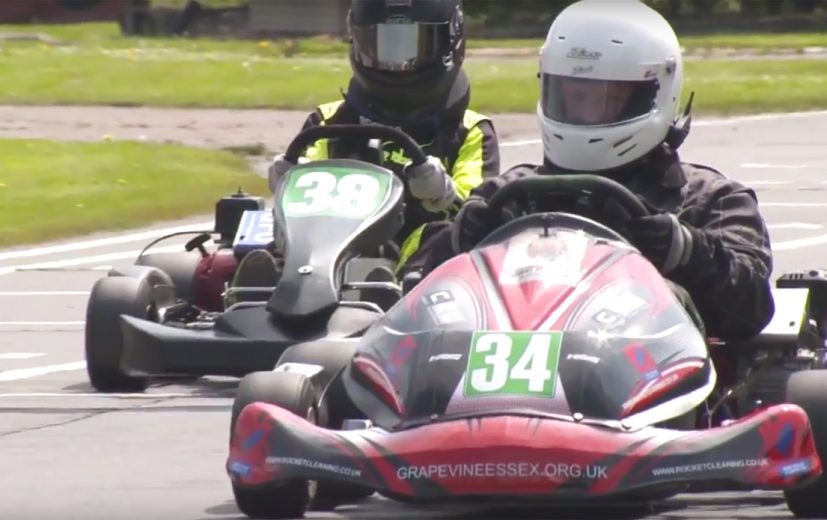 Bri’s first experimentation in automotive sciences started when he was 7 years old. Family car (Vauxhall Victor) parked on the beach at Redcar – Bri decides to dig large holes in front of each of the wheels, curious to find out what happens when a large car falls down a hole! Didn’t really work out too well. Around the age of 9, he was able to learn to drive his Mum’s Fiat 126, being left for hours at a time with the car on a farmers airstrip, while his Dad was doing the Farmer Clients accounts on Saturdays.

The highlight of the year from 1982-84 was the 2 week summer camp in Oxford. Probably around 40+ Kids all turned up at a campsite on a farm with a very large flat expanse of concrete and a HUGE barn full of kart parts. The idea was to search out the necessary kart parts, build a kart, lay out a track with hay bales on the large concrete area, and drive for a couple of weeks. They were little Zip framed 100cc direct drive. 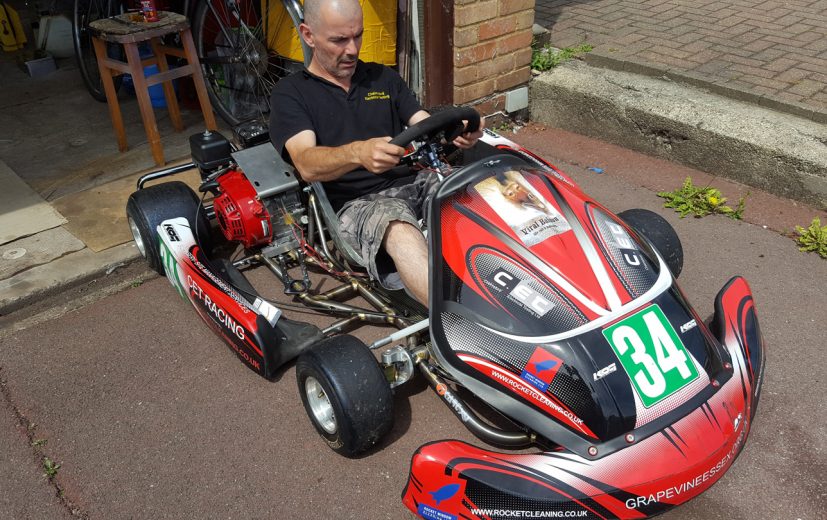 Kev has been a team member since the very first race and always performed well in the CET Corporate events and Ryehouse. Recently Kev has taken a back seat but still a real asset to the team. Since CET Debut in Pro-Karting Kev has never missed a testing season or race.

Bri, Mup & Kev, by accident happened to go and do a 3hr endurance in January 1993 at Kartsport (Caxton)

“are you guys here to sign on for the league” greeted us at reception.
“what league?” replied the guys
“the new endurance league, 12 races, it’s the first round tonight!”
“Why Not?” someone muttered – the deed was done.

After cleaning up totally by the September Race, and a bucket full of debatable plastic, the guys are quite pleased with their progress. Especially when you know one of the very young guys there at Caxton was Rob Huff (Touring Cars)  he must have been around 14 Yrs. He was very fast then.

The Guys came across Pro-Karts around 1995. A couple of fund-raising days for British Sports Association for Disabled (BSAD) at Surbiton saw comprehensive endurance victory’s on both the Charity fund-raising days and Mup came away with touring car driver, James Kay’s Gloves (Mup was 0.11 quicker).

2014 – Bri challenges a Company that CET Ltd were working for, A 6 hour Buckmore Park Endurance in December. Being slightly sneaky, the guys start doing 2 -3 hour races a few months before to try to get the edge. December came, CET beat the other Company but were pretty slow overall. Why is this? Oh yeah, the kart was crap/it was wet/they bumped me – all the pathetic excuses came out!

2015 – We Decided over a large amount of beer that we should buy a kart of some sort. All sorts of ideas were floated, from TKM to Gearbox, Rotax to prokart – we basically had absolutely no idea what we were thinking. Initally we was going to get a cheap ratbox to run down to Tilbury at weekends and smash the living daylights out of it! Alas no, Tilbury had shut 2 years before – you can see how seriously we took it!!

Decision made – “let’s get a prokart – I’m pretty sure that’s the one with 2 wacker plate/honda engines – or at least it was in 1995”. We had absolutely no idea what we were doing. At least with a Pro-Kart, it’s probably going be a team effort in the form of endurance. 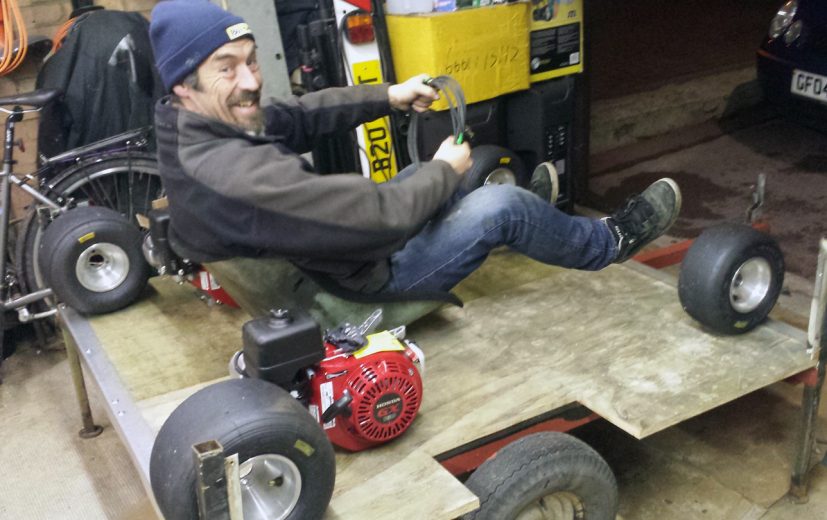 Early 2015 – We Bought the Mk1 7Kart (Stratos Storm II) and a Trailer. It had a pair of dubious honda 160’s mounted on it. We were on our way! We took it to Rye mid January only to watch it disintegrate as we drove it round (not the kart itself, but everything attached to the frame) Engines came loose = ruined sprocket and chain, we knew nothing!

Dave & Elliot happened to be there testing the no. 9, Team M&H. That day they were running in 2 new T2’s motors.

– “Brilliant, been karting for about 3 hours and we need 2 of these T2 things and some new exhausts”

We bought T2’s from a farm machinery shop, did a bit of youtube watching, removed the governor, put the biggest legal jet and emulsion tube and waited to see the lap times plummet. Didn’t really happen as we expected. 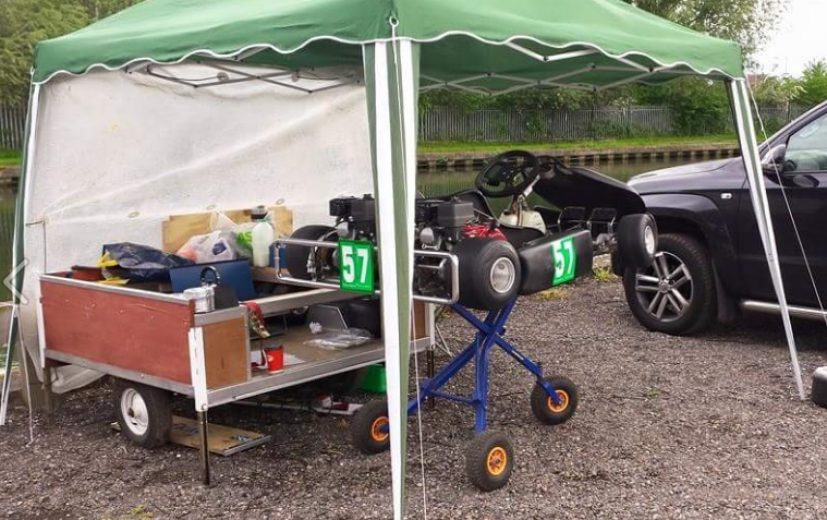 Armed with de-baffled exhausts, a pair of t2’s, a gazebo that was so small, a hammer, socket set and a kettle, we set off to the March Race. At 11.15 that day, we retrieved our now 3 wheeled kart from the outside of Reg’s Elbow – snapped stub axle. (Thanks JRH)

It was about this moment we realised we were in the company of some very decent folk – Geoff Lamb immediately  produced a stub axle – hoorah. 15:00 The race started – lap 9 after backing it into the tyres at the end of the start finish, Mup came into the pits with the rear bumper firmly rubbing on the tyre. As we casually stood there and discussed the quickest way of removing the bumper so we could straighten it, Rob Nurse jumps over the barrier yanks the rear bumper shouts “that’ll do it – GO”. After what seemed like about 50 driver changes/pit stops later, we crossed the line to finish our first ever race at Rye. We came away from that day not really sure what was happening, with plenty of food for thought.

October 2015 first podium (well the edge anyway) 4th place in class. November 2015 – 1st in class – 4th overall – That was one of those days where it all went perfectly for us and pretty badly for everyone else…….

2016. March-June driving the Mk1 still, snapped one of the steering stays 40 mins into race – still finished. Celebrated by buying a 7Kart XV!! 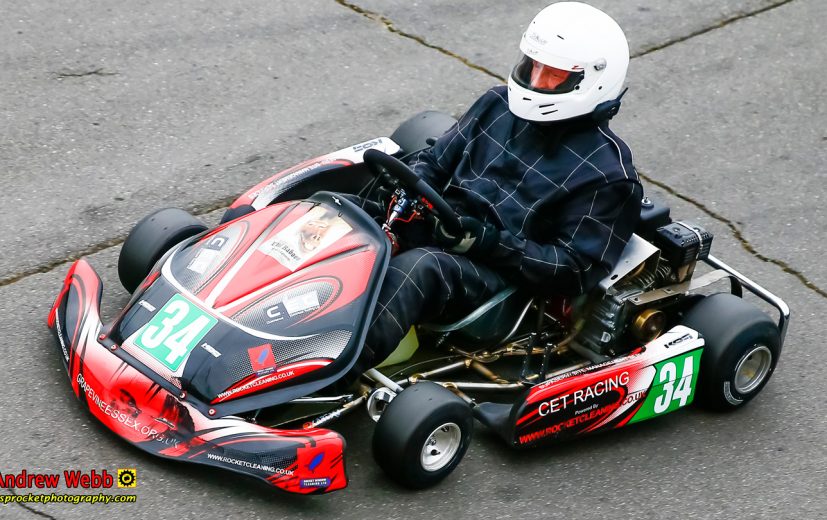 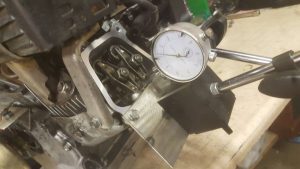 The ‘engines’ side of karting is something that we like to do ourselves. As mentioned earlier, we bought a couple of new T2’s, removed the governor, changed the valve springs, changed jets and emulsion tubes.

The jet we had fitted was far too big so when the throttle opened fully for the first time the engines didn’t respond – mixture far too rich. Schoolboy errors… 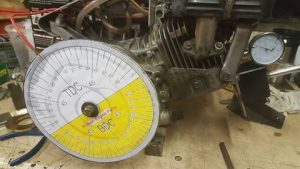 So, we built a DIY/BODGE “dyno” out of an old exercise bike, a couple of axle stands and some blocks of wood.

Timed the acceleration to 6000 revs and kept rejetting and changing emulsion tubes to try to reduce the time. Pretty successful really all things considered.

November 2016 we had a properly torrid time during the race due to the Biggest schoolboy error ever….. All the time spent rebuilding engines etc. – we never cleaned the 50 pence foam air filter. All of the rubbish and dust from many hours of racing/testing etc managed to turn into a disgusting crust when it got wet, the engine wouldn’t really run very well at all so it felt like running on 1 ½ engines… ‘Cause the engines were crap’ we bought a couple of new T2’s the next day. We subsequently discovered the problem and we’ve never taken the new engine out of the box as our old ones are as good as any clubman engine out there – proven to us by someone who can actually drive it!!

We rebuild the engines completely every 4 – 5 races, re-hone, valve lap, new rings/gaskets etc. We’ve since got this process down to around 2 hours per motor depending on how dirty they got last time out!

John Huff said to us “if you finish the race – you won’t be last”.

We’ve never been last in the points at any race, mainly because we have completed every race we have ever taken part in. Wise words John, Thank you.