We announced the exciting news during the Winter Cup last Saturday, RHPK can confirm that Karting Magazine will be entering a team for the full season with us this year, teaming up with Biz Karts.

This will be the first time that the Karting Magazine has entered a Championship. A real honor this year, considering the big announcements already which is going to make this a true standout year for the series. 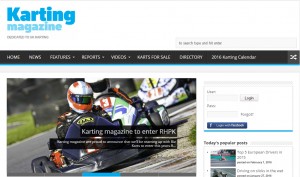 Featured on the front page of the Karting Magazine!

Guest drivers are also set to join the team throughout the series, details to follow shortly.

The Magazine will also be hosting a competition to come race with them at each round completely free!

Watch out as at several rounds there will be competitions run through the Karting magazine Facebook page which will see winners come and race with the team for FREE at each round. So make sure you enter as it could you be you racing with team Karting magazine in RHPK.

The announcement  was also mentioned today on Downforce Radio, “The Karting Show” which is a Karting Podcast, new for 2016.

Listen to the The Karting Show – February 2016 here, or by clicking the link on the image to the left.