First off, Happy new year all! I hope you all had a great Christmas and I’m sure you’re itching to get back in the seat asap like me!!

I wanted to share my GT academy experience with the Rye community, I know some of you have heard about my time away competing in the competition, but I thought it would be cool to share the whole process with you, I apologise in advance as it’s quite lengthy, but hopefully will give everyone an idea what it was all about!

GT Academy for those that don’t know, is an innovative driver selection program created by Nissan Motorsport (NISMO) in partnership with PlayStation.

In a nutshell, they take the fastest gamers from around the world, put them through a series of real life challenges such as physical and on track race car driving and the winner goes on to be a professional racing driver with Nissan. Past winners have gone on to compete in some of the highest levels of motorsport including the Blancpain endurance series, Le Mans 24hrs and GP2.

So in 2015, thinking to myself well I’m not to shabby on racing games and not bad in a kart…i’ll give it a crack!!

The game used to qualify for GT Academy is Gran Turismo, hence the name GT Academy. My first steps were simple, I borrowed my brother Andrews PlayStation 3 and went and bought a copy of the game. 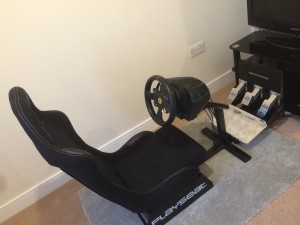 I soon got the feel for the game, and thankfully was pretty quick on it. I realised that these gamers online though are what are referred to as Aliens, they are beyond quick! If I was to have any hope I needed to take the next step, buying a steering wheel and pedals!! Out with the control pad it was, the new gear helped me shave off vital tenths of a second.

The competition I was entering was open to 7 different regions across Europe. 8 qualifying spaces per region were up for grabs.

So the qualification dates were announced, there were 2 ways you could qualify. You could go for option A) qualify online at home through a series of trials, 4 trials to be precise. The fastest 4 qualified for European Race Camp in Abu Dhabi at the Yas Marina circuit. Option B) was to qualify through 1 of the live events, one being held at Goodwood in June, the other being held at Manchester in September. 3 places were up for grabs at Goodwood, 1 at Manchester. I knew my best option was going to be via the live events, so that’s what I went for. To put qualifying in to perspective, nearly 1 million people across Europe entered the competition, hundreds of thousand in the UK alone. Being completely new to the game I practiced on a few of the major circuits in 1 car and hoped they would pick one of the combinations id practiced.

Attempt 1) Goodwood! So I rocked up on the Sunday and spent all day on my todd hanging around the Nissan stand. I was the first one on the simulator rig and I set the fastest time on the goodwood hill climb in the Nismo LMP1 car which was the challenge they had set.

The fastest 6 of the day were called back at the end of the day and were put through another set of challenges. Media interviews, Batak reaction tests, a nismo fitness test and 5 laps around the Nurburgring in a Nissan GTR Black edition….a combo I hadn’t practiced! Despite my worry about the new combo, I made it to the final 2 selected by the judges, I then had to go head to head against a lad called Mathieu (Matty) who missed out via qualifying at home by 1 place! Understandably he was awesome on the game and knew it much better than me. So we went head to head around Nurburgring, the fastest time over 5 consecutive laps would win a place at race camp in Abu Dhabi.

Matty won! I was devastated! He beat me purely because I just didn’t have the experience on the game, I didn’t know all the combinations and he was quicker over the 5 laps.

I went away from Goodwood in a strange mood, gutted because I got to the final 2, but fired up because I got so Close to qualifying. And it wasn’t all bad, I won a PS4 for coming second….

So what next? Practice, practice and practice! There was one final chance being held at the Trafford Centre in Manchester. Every day, for 2 months I spent about an hour + on Gran Turismo, practicing different combinations, geeky I know but the prize on offer was huge, and like many reading this, I’ve wanted to be a racing driver my whole life. 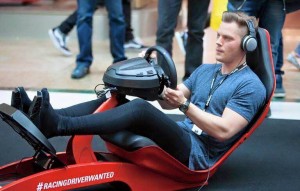 September arrived as did the event at Manchester, I drove up from my home in Stevenage and stayed at my mums in Chester for the weekend . It was a massive weekend for me, so many conflicting thoughts, I came so close at Goodwood, could I really repeat my great effort and go one better?! Also my family at this point were getting very excited because they had been following me on my journey through the process. I’d set up a whatsapp group from the start and the excitement was crazy. I must say I am blessed to have such an amazing family who were with me every step of the way with words of support and praise. Having said that, I banned all my family coming to watch me in Manchester! I didn’t want the distraction, plus it would of added to my nerves them being there.

Saturday, day 1 of qualification, who arrives first to the event?? That’s right, geeky Bishop. Straight on I went, straight to the top, and that’s where I stayed all day Saturday. Throughout the day I had about 5 goes, each time improving my time on the combination which was The Silverstone international circuit in the GTR black edition. It was a good day, I looked set to be in the top 6 times for sure, but Sunday was what counted, had I peaked to soon?

Sunday, the final day. I’m pleased to say I stayed at the top all day Sunday, again further improving my time a few times. The pressure was starting to mount though, a few of the other previous top 6 qualifiers rocked up from Goodwood, the pressure went up a level and so did the competition. We’d all been practicing and as 4pm came when the qualifying window closed, the top 6 was full of the previous qualifiers from Goodwood. Still I had to stay calm and keep positive, I was still fastest and knew it was my time to grab this opportunity.

The final challenges began, media interviews, Batak reaction tests, fitness tests again and a new combination, Nurburgring in the Nissan GTR black edition again! The one combo I hadn’t practiced again because I’d assumed they wouldn’t repeat what they did at Goodwood. 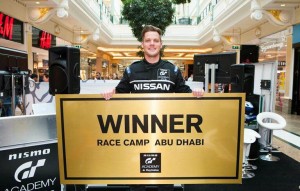 I made the cut for the final 2! It was between me and a chap called Gary Wright, we’d both made it to the final 2 at Goodwood on different days. Gary was a great guy, I’d been chatting with him all weekend in Manchester as he’d got there early like me, we soon became friends over the weekend, now it was time to go head to head though. We had 5 laps around Nurburgring to set a qualifying lap time, just one lap counted, so it was outright whoever went the fastest over that 1 lap would win the final ticket to Race Camp in Abu Dhabi.

This was it….what id been thinking about for months, all my family were getting over excited on whatsapp. It was time to deliver, and I’m pleased to say I did. I set a laptime 1.2 seconds faster than Gary, I don’t know how I managed it but the adrenalin kicked in and I just let loose. Every single one of my 5 laps were faster.

I’d done it, I had qualified for the biggest opportunity of my life. I was going to Abu Dhabi to compete to become a professional racing driver. The grin on my face did not stop for at least 48hours. Even a champagne headache the next morning couldn’t stop the smile.

Qualify for GT Academy = Check. Next stop Abu Dhabi in just over 2 weeks.